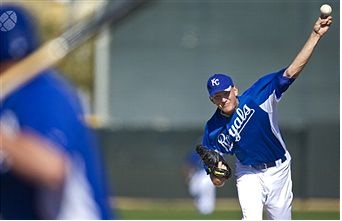 **Kansas City Royals pitching prospect Mike Montgomery allowed one earned run in five innings last night for Triple-A Omaha, fanning eight Iowa Cubs and allowing just two hits, but walking five. On the season, he is now 2-3, 5.00 in 14 starts with a 64/46 K/BB in 76 innings, 66 hits allowed. The Royals hoped he would be ready to contribute in the majors sometime this year, and while we may still see him at some point, he isn't as advanced as they hoped he would be entering the campaign.

PCL sources indicate that he's showing the same stuff as before, low-to-mid-90s fastball, curve with a lot of movement, decent changeup, but that his command has been worse than anticipated and he's had a few mechanical issues. He's still picking up ground balls at a good clip, and as long as there is no injury (and there is no evidence of that), I think he'll come around eventually. He doesn't turn 22 until July.

He's back on the mound this year and showing his low-to-mid-90s sinker, plus curveball, and workable changeup. He keeps the ball down and has a 2.53 GO/AO, but his walk rate is too high and he still needs to sharpen his command. Crosby is 22 and his ceiling remains quite high, but he needs more time before he's ready for major league action.

**Chicago Cubs prospect Brooks Raley had a nice start on June 9th for Double-A Tennessee, going 6.2 innings, allowing two earned runs on seven hits and one walk, fanning four and picking up the victory. His performance this year has been spotty, and his overall numbers aren't very good: 4.84 ERA in 12 starts, 35/28 K/BB in 61 innings, 79 hits.

A sixth-round pick in 2009 out of Texas A&M, Raley was a two-way player in college and is a terrific athlete. The Cubs hoped that moving him to the mound full-time would boost the quality of his stuff, but the results have just been so-so. He works at 88-92, and while his curveball and changeup are decent, none of his pitches are spectacular and his K/IP rate is low. He rates as a Grade C type at this point, but given his background there may be some upside yet to tap.

**Washington Nationals prospect Sammy Solis was activated from extended spring training in late May and has made four starts for Low-A Hagerstown in the Sally League. In his first 23 innings, he has a 3.09 ERA with a 24/9 K/BB, 17 hits allowed, and a 1.65 GO/AO ratio. Solis was drafted in the second round last year from the University of San Diego. A big-body guy at 6-5, 230, Solid pounds the lower half of the strike zone with a 89-93 MPH sinker, has a nasty knuckecurve breaking ball, and mixes in a very good changeup. He has good makeup as well, and could see Double-A by the end of the year.