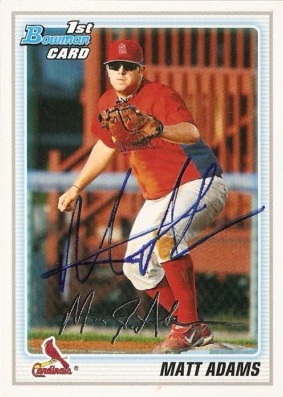 **I'm getting a lot of questions lately asking for my take on St. Louis Cardinals first base prospect Matt Adams, currently hitting .313/.371/.589 with 31 homers, 40 walks, and 85 strikeouts in 435 at-bats for Double-A Springfield. Is this for real?

Adams was a 23rd round pick in 2009 from Slippery Rock University in Pennsylvania. He was outstanding in college, hitting .495/.556/.853 with 14 homers, 31 walks and just 17 strikeouts in 184 at-bats that year. But it was Division II competition and he has a bad body, so scouts were skeptical.

He turns 23 on Wednesday and has a stocky 6-3, 230 pound build. Despite his lack of classic tools and mediocre defense at first base, it is hard to argue with the bat. His bat speed is impressive and his power is real, and while I would like to see more walks out of him, his strikeout rate is quite low for a player with firepower of this magnitude, a good sign for the future. I gave him a Grade C in the 2011 book, but that's at least a B- now and a straight B and a spot in the Top 50 Hitting list is possible later this fall.

Liriano has improved his ability to handle breaking balls this year, and Midwest League sources are impressed with better polish in most aspects of his game this year, driving the ball for more power and sharpening his baserunning. He has a right field arm but is still working on reading the ball and avoiding mistakes and errors. All-told, I am pleased with his progress and he's moving into the B-range along with Adams, albeit for different reasons.