Not a Rookie: Joe Mather

Share All sharing options for: Not a Rookie: Joe Mather 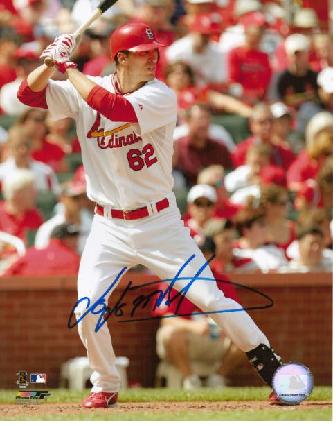 Not A Rookie: Joe Mather

Joe Mather was drafted by the Cardinals in the third round in 2001, out of high school in Phoenix. A shortstop in high school, he impressed scouts with his size, athleticism, and power potential, but was considered rather raw. The Cardinals moved him to third base, and he hit .248/.288/.358 for Johnson City in the Appalachian League. I didn't rate many short-season players back then, but would have given him a Grade C: toolsy, but unrefined. He posted a 7/60 BB/K ratio in 165 at-bats, demonstrating huge problems with contact.

Returned to Johnson City in 2002, Mather hit .232/.320/.424, boosting his power production and improving his plate discipline, substantially cutting his strikeout rate. I would have given him a Grade C again, but might have seen some sleeper potential given the improvement in his discipline.

Mather moved up to the New York-Penn League in 2003 and struggled, hitting .230/.314/.332 in 65 games, mostly at first base. I wasn't thinking of him as a prospect at all at this point, and a Grade C rating would be appropriate.

The first time I saw him play was in 2004. He hit .253/.333/.432 in 65 games for Peoria in the Midwest League, now playing mostly outfield. This was improved performance, and I remember being impressed with his size and strength on the field, though he still needed to sharpen his strike zone judgment and contact ability, fanning 70 times in 241 at-bats. I didn't put him in the 2005 book for space reasons, but had him rated as a Grade C.

What we have in Mather is a tools guy who gained just enough polish to let his talent come through in at least a moderate way. I don't think he'll ever hit for a high batting average, and I think his baseline is as a .250 hitter, with enough power to be useful. But remember, a "baseline .250 hitter" can hit .280 (or .220) in any given year based on luck. The PECOTA comps are instructive: Ozzie Timmons, Scott Hairston, Ryan Ludwick, Joe Charboneau, Craig Monroe, Wes Chamberlain, Jason Lane. Another possible comp would be Shane Spencer.