Not a Rookie, Reprise: Justin Upton

Share All sharing options for: Not a Rookie, Reprise: Justin Upton 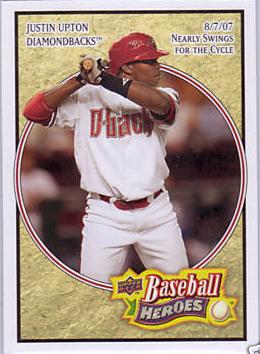 Not A Rookie, Reprise: Justin Upton

We did a Not a Rookie on Justin Upton about a year ago, and of course the historical background is still valid.

Kudos to PECOTA and Shandler. . .any projection within 10 OPS points has to be considered a big success in my book.

For 2009, we find the following projections

None of those seem like an unrealistic outcome to me, CHONE being a "needs consolidation time" outcome, while PECOTA being unusually optimistic, but not massively so given Upton's undoubted talents.

The PECOTA comp list is, perhaps, less helpful than one might hope in regards to reading Upton's future: Bob Horner, B.J. Upton (gee thanks for that one), Darryl Strawberry, Jeff Burroughs, Lloyd Moseby, Clint Hurdle, Mike Anderson, Ron Swoboda, Lastings Milledge, and Griffey Jr. being the Top Ten. Others on the list: Gary Carter (?), Andruw Jones, Rusty Staub, Gary Sheffield, and Sammy Sosa. Most of this is not surprising, it just confirms that Upton has immense talent and could develop into a Hall of Fame type player, but still runs some risk of early burnout.

I will be doing a Crystal Ball for Upton soon.