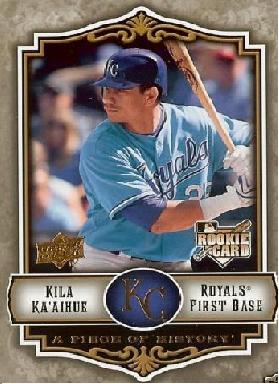 2) Eric Hosmer, 1B, Grade A-:  .254/.352/.382 in the Midwest League, .207/.261/.293 in the Carolina League. I don't understand the promotion to Wilmington. He was controlling the strike zone fairly well at Burlington but I don't see how his overall performance justified the bump up a level. Like Moustakas, still very young but stock is down a notch right now. Note that he was rated as a B+ in the book; I lowered the grade before publication.

4) Daniel Cortes, RHP, Grade B: Traded to Mariners in Betancourt deal. 4.62 ERA with 86/75 K/BB in 111 innings in Double-A. Big deterioration in K/BB and K/IP ratios this year, velocity reported down as well, and I don't like these trends. Stock dropping.

6) Daniel Duffy, LHP, Grade B:  3.51 ERA with 95/31 K/BB in 100 innings, 93 hits for Wilmington. Hasn't pitched since July 28th, when he left the game early with an injury. Anyone have any idea what it was? I like Duffy but I think he might be a tad overrated and prefer the higher-ceiling Montgomery now. NOTE: he pitched this weekend and looked fine; the injury was a sore back.

7) Michael Montgomery, LHP, Grade B:  2.16 with a 71/32 K/BB combined between Burlington and Wilmington, 1.66 GO/AO in 79 innings, just 57 hits. I like the strikeout/ground out combination. Needs to improve his command, but ceiling is very impressive. Top Royals prospect now.

10) Dan Gutierrez, RHP, Grade B-:  Has pitched 12 scoreless innings for Wilmington with 13/2 K/BB after coming off season-long DL stay. Very intriguing prospect if he stays healthy.

11) Blake Wood, RHP, Grade C+:  5.27 ERA with 46/23 K/B in 72 innings for Northwest Arkansas, before going down in June with injury. Has always had the stuff, but command and health are big obstacles.

16) Matthew Mitchell, RHP, Grade C+:  Out all season with injury.

Jeff Bianchi was a Grade C but his stock is going up again. Also keep an eye on submariner Chris Hayes and hard-throwing Juan Abreu as relief sleepers. The big breakthrough this year has been outfielder Jordan Parraz, stolen from the Astros for Tyler Lumsden after this list was made last fall.

It is too early to panic regarding Moustakas and Hosmer, and keep in mind that both Burlington and Wilmington are difficult places to hit, though short term expectations need to be tempered. Giavotella looks like a really good candidate for a big breakthrough next year.  On the other hand, there is a lot of injury attrition among the pitchers. Derrick Robinson has stolen 56 bases but has no power, though at this point he looks like a better prospect than Adrian Ortiz at least.  They continue to pour money into the draft. The '09 class is pitching-thick and college-oriented, though the recent signing of high school catcher Wil Myers (a late first round talent) in the third round adds another high-ceiling bat. This will pay off in the long run, but I remember back in the 90s when the Twins were terrible for many years...it is hard to be patient.