Not a Rookie: Chris Volstad

Share All sharing options for: Not a Rookie: Chris Volstad 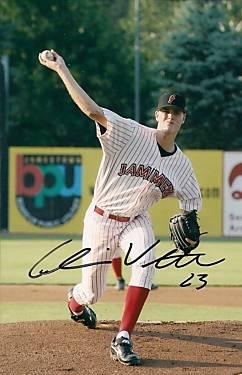 Not a Rookie: Chris Volstad

Chris Volstad was drafted by the Marlins in the first round, 16th overall in 2005, out of high school in Palm Beach Gardens, Florida. Tall and projectable at 6-7, 190, he threw as high as 94 MPH in high school, but would sometimes drop down into just the 86-88 range. His breaking ball and changeup were considered promising, but inconsistent. He was very successful in rookie ball, combining to post a 2.22 ERA with a 55/15 K/BB in 65 innings between the GCL Marlins and Jamestown in the New York-Penn League, holding his own against older competition. I gave him a Grade B+ in the 2006 book, noting that he had some work to do gaining consistency and strength, but that his ceiling was very high.

Volstad spent 2006 with Greensboro in the Sally League, going 11-8, 3.08 with a 99/36 K/BB in 152 innings, 161 hits allowed. He was hittable, and his velocity was still inconsistent, anywhere between 86 and 92 MPH depending on the day. But he posted a 2.30 GO/AO mark, impressed scouts with his ability to throw strikes low in the zone, and made progress refining his curveball and changeup. I was a bit concerned about the low strikeout rate, dropping his grade a notch to Grade B in the 2007 book. I was also somewhat concerned about the heavy workload perhaps leading to durability problems, though his pitch efficiency was helpful and his mechanics were rated as reasonably consistent for such a tall pitcher.

The Marlins moved Volstad up to the Florida State League to begin 2007. He posted a 4.50 ERA in 20 starts, with a 93/37 K/BB in 126 innings with 152 hits allowed. Promoted to Double-A late in the year, he went 4-2, 3.16 with a 25/10 K/BB in 42 innings with 41 hits allowed, perhaps benefiting from better defense behind him. Scouts continued to praise his mound presence and strike-throwing ability, as well as further progress with his curveball and changeup. His velocity was still up and down, hitting 93-94 MPH occasionally but also frequently in the 87-88 range. I gave him another Grade B in the 2008 book, writing that Volstad looked more like an inning-eater type than the dominator projected by the Marlins, but that he was still young enough to develop in any number of ways.

What should we expect going forward? Although the ground balls certainly help, I would like to see a higher strikeout rate and fewer walks. He doesn't have to be a K-machine, but based on his components, his ERA should have been something like 4.30 or 4.40 last year, not 2.88.

PECOTA results are interesting, the system giving Volstad a 46% collapse rate, and just a 15% improvement rate and a 4% breakout for 2009. Without stealing Baseball Prospectus technical thunder, that basically means he is more likely to pitch worse in 2009 than he did in 2008. Looking longer-term, PECOTA comps are Jamey Wright, Brett Myers, Mike LaCoss, Jon Garland, Joel Davis, Matt Morris, Don August, Charles Nagy, Craig McMurtry, and Charlie Kerfeld for the top ten. Others include Lee Tunnell, Kip Wells, and Chris Carpenter.

There is an expectation among Marlins fans and Volstad's fantasy owners that he is going to develop into a Brandon Webb-style ace, perhaps as soon as this year. Such an outcome is possible, but I think people need to temper their expectations, at least in the short run. Volstad is just 22, had no Triple-A experience, and his components last year don't match the ERA result. He's had a fairly heavy minor league workload and is still in the injury-nexus phase of his career. The PECOTA comps point out Volstad's upside. . .guys like Nagy and Morris were very good pitchers. . .but there's considerable  risk here, too.

As much as I like Volstad, and I do like Volstad, I want to see more before concluding that he's a number one, rotation anchor-type.