Not a Rookie: Matt Harrison

Share All sharing options for: Not a Rookie: Matt Harrison 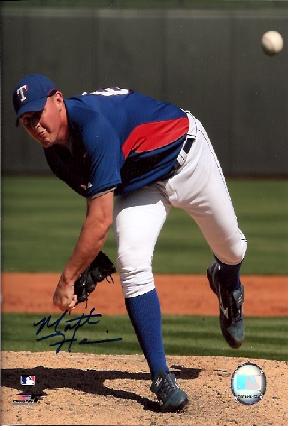 Not a Rookie: Matt Harrison

Harrison was a third round draft pick by the Braves in 2003, out of high school in Stem, North Carolina. Considered a classic projection lefty, he threw 87-91 in high school, showed promise with his curveball and changeup, but needed to get stronger and generally gain experience and innings, the typical Atlanta Braves high school pitching prospect. He performed well, but not spectacularly, in rookie ball, with a 3.69 ERA and a 33/9 K/BB in 39 innings, 40 hits allowed. I would give a similar prospect a Grade C or maybe C+ nowadays, awaiting more data from higher levels.

Moved up to the Appy League in 2004, Harrison went 4-4, 4.09 with a 49/10 K/BB in 66 innings, 72 hits allowed. His best attribute was excellent control, as shown by the low walk rate, but his strikeout rate was low and he wasn't dominant. Grade C, though his command and youth made him someone to watch.

Harrison made his full-season debut in 2005 and did very well in the Sally League: 12-7 3.23 with a 118/30 K/BB in 167 innings, 151 hits. His velocity was up just a hair from his high school days, 88-92, and he continued to make progress with his curveball and changeup. His strikeout rate was below league average, and for that reason I gave him a Grade C+ in the 2006 book, writing that he had "considerable potential" but wasn't a sure thing yet.

I grew more confident after his '06 season. He began with Myrtle Beach in the Carolina League, with a 3.10 ERA and a 60/16 K/BB in 81 innings, 77 hits allowed. Promoted to Double-A at age 20, his marks didn't slip much in the second half: 3.61 ERA with a 54/17 K/BB in 77 innings, 84 hits allowed, increase in his hit rate being the main difference. The scouting report was the same: 88-92 velocity, good curveball and changeup, sharp command, but he held his own in his first Double-A exposure, passing the Double-A Pitcher Acid Test. I gave him a Grade B in the 2007 book, noting that he didn't have a huge margin for error, but that I had a good intuitive feeling about him.

Returned to Double-A in 2007, Harrison went 5-7, 3.39  with a 78/34 K/BB in 117 innings, 118 hits allowed. His ratios deteriorated very slightly, and reports had his velocity dropping back into the 86-88 range for much of the spring. He missed time with a sore shoulder. Traded to Texas in the Teixeira deal, he was wisely shut down by the Rangers as a precaution. He came back to the mound in the Arizona Fall League, suddenly boosting his velocity to 92-93 MPH, clearly on the mend from the shoulder issue. I gave him a Grade B+ and said I was "quite optimistic" about him heading into 2008. A lot of people felt that grade was too high.

Harrison doesn't have to be a K-machine, but he's got to improve the strikeouts and lower the walks to survive and maintain that progress. His spring numbers this year: 5.63, 12/6 K/BB in 16 innings, 18 hits allowed. . about what he did last year overall. He wasn't particularly vulnerable to the home run in the minors, but has been so far against major league competition, obviously a problem in Texas. PECOTA is not particularly optimistic, comping Harrison with a bunch of mediocre southpaws: Trever Miller, Andrew Lorraine, Bobby Livingston, Billy Traber, Randy Lerch, Scott Karl. . .Pete Schourek. The best on the list is Bruce Hurst, but he is number 19.

I've liked Harrison a lot in the past, but the environment in Texas is unforgiving, and I do think it would have helped him to have more Triple-A under his belt. I have no objective sabermetric reason to think he'll make huge adjustments and leap forward this year, and 2010 may be a better bet. Watch for any increase in his K/IP ratio, that would likely be the first hint of improvement. I do think a Hurst-like outcome is possible. . .Denny Neagle, John Tudor perhaps, if Harrison remains healthy and doesn't get crushed by the environment.