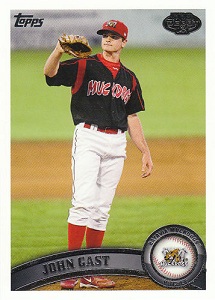 Let's review the Sleeper Alert! list from the 2011 book (which you can still order by the way!). Here are the second 15 alphabetically and we will review all 59 players as the week moves forward. I'm including a brief mention for each player of the reasons they were on the list, if it was stats, scouting reports, intuition, or some combination thereof.

Ismael Guillon, LHP, Cincinnati Reds: 5.66 ERA in 21 innings for Billings in the Pioneer League, 16/18 K/BB, 23 hits, 1.93 GO/AO. Age 19. Numbers unimpressive so far due to command problems but sample is small. Rating was based on statistics and scouting.

Deryk Hooker, RHP, St. Louis Cardinals: 6.14 ERA with 27/14 K/BB in 37 innings for Double-A Springfield. On disabled list since mid-May. Age 22. Rating was based on stats and scouting.

Su-Min Jung, RHP, Chicago Cubs: 5.36 ERA with 19/24 K/BB in 44 innings for Low-A Peoria, just demoted to short-season Boise. Age 21. Rating was based on stats and scouting, he succeeded in Low-A last year so command slippage is disappointing.

Big hit with this second group of 15 was Hutchison, Kirk and Gast are solid, but lots of disappointments too.