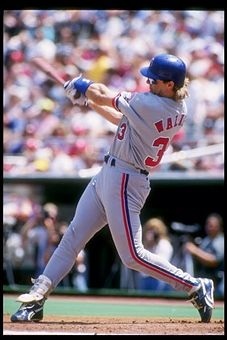 Larry Walker was signed by the Montreal Expos as an undrafted free agent out of British Columbia in 1984. Canadians weren't eligible for the baseball draft back then, and the sport wasn't played as often up north as it is now. Walker was primarily a hockey player until age 16, but caught the eye of Expos officials and was signed for a $1,500 bonus. He was very athletic, but also very raw, and the signing was more of a "give the Canadian kid a chance in case he develops into something" decision than a "this guy is a top prospect" investment.

Walker was assigned to Utica in the New York-Penn League in 1985 at age 18, playing third base and first base. He struggled with the bat, hitting .223/.297/.307 and having strike zone issues. He did swipe 12 bases and showed athleticism, but there were serious doubts about his ability to handle higher-level pitching, and there was apparently some thought in the organization of releasing him. Fortunately, it was decided to give him another season to develop. A similar prospect now would get a Grade C rating.

Walker moved up to Low-A Burlington in 1986 and something clicked: he hit .289/.387/.623 with 29 homers and 16 steals in 95 games, which got him a promotion to High-A. He remained productive at West Palm Beach, hitting .283/.423/.540 on the season with four more homers. He drew 72 walks combined between the two levels, and while he struck out 144 times, it was clear that he'd made terrific progress. He transitioned from third base and became a full-time outfielder as well. A player like that now (age 19, great tools, skills blossoming suddenly)  would get at least a Grade B+ and maybe an A- depending on the exact reports.

Promoted to Double-A Jacksonville in 1987, Walker hit .287/.383/.534 with 26 homers, 24 steals, 67 walks, and 120 strikeouts in 474 at-bats. Power, speed, patience, youth, this was the complete package, and would rate at least a Grade A-. I might even give a guy like that a straight Grade A although the strikeouts might prevent that, but Walker was clearly an elite talent.

Walker finished with a career mark of .313/.400/.565, OPS+140, WAR 72.2.  He was a five-time All-Star, won an MVP Award in 1997, and won seven Gold Gloves. There might be a tendency to write much of his performance off as a creation of Coors Field, but even adjusting for that he was a tremendous player, a great hitter and an excellent defensive player in his prime. His biggest problem was his inability to stay healthy for a complete season, which cut into his ultimate counting stats.

Will he get into the Hall of Fame? Not immediately, but I think there's a decent chance he will eventually. He may get downgraded due to the Coors effect and the general high-offense era of the 1990s, but even adjusting for all of that, he deserves strong consideration at least. Either way, Walker was an outstanding player, and it's difficult to accept that he might easily have been released after struggling in rookie ball.