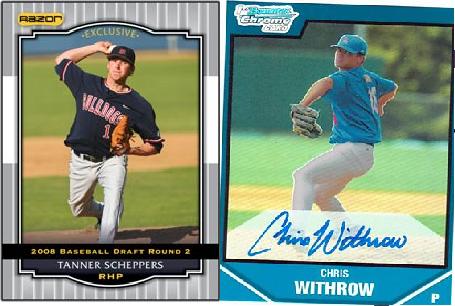 Whenever I do one of these either/or discussion questions, I try to pick one that I think will result in a close poll result and good discussion. We usually do get good discussion about it, but the poll results are never as close as I think they are going to be. So let's try again.
Today's topic is Tanner Scheppers of the Rangers vs. Chris Withrow of the Dodgers. Both are hard-throwing right-handers with electric stuff. Withrow is younger (born April 1, 1989, Scheppers born January 17, 1987). Scheppers is one inch taller (6-4, 195 vs 6-3, 195). Both have blistering fastballs clocked in the mid-to-upper-90s at times, though I think Scheppers may be just a hair faster. Both have strong curveballs. Both need to polish their changeups. Both have injury problems in their resume: Withrow with elbow problems in '08, Scheppers with shoulder trouble. Scheppers is considered a bit more polished in general, but Withrow has more of a pro track record to look that.

So, if you could have one guy or the other for your favorite major league organization, who would you pick?