Not a Rookie: Matt Joyce

Share All sharing options for: Not a Rookie: Matt Joyce 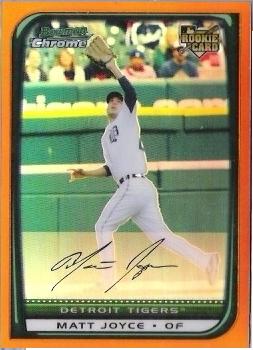 Not A Rookie: Matt Joyce

An unheralded rookie from the 2008 class is Tampa Bay outfielder Matt Joyce, acquired this past December from the Tigers.

The Tigers drafted Joyce in the 12th round in 2005, out of Florida Southern College. He had a mediocre junior season and scouts rated his tools as just average, but he had impressed Detroit officials with good performance against them during a spring training scrimmage. His pro debut was very strong: .331/.397/.453 in the New York-Penn League, posting a +26 percent OPS and showing excellent strike zone judgment with 30 walks against 29 strikeouts in 245 at-bats. I rated him as a Grade C+ in the 2006 book, with a sleeper notice, needing to see data from higher levels, but liking the early numbers.

Promoted to West Michigan in the Midwest League in 2006, Joyce hit .258/.338/.415 with 11 homers, 30 doubles, 56 walks, and 70 strikeouts in 465 at-bats. That may not look great on the surface, but his OPS was still positive at +9, and the high walk rate/low strikeout rate combination was still intriguing. I gave him a Grade C entering 2007, noting that he might increase his power and was worth keeping a close eye on.

The Tigers jumped Joyce to Double-A in 2007 and he responded with a .257/.333/.454 mark, with 17 homers. His strikeout rate spiked up to 127 in 456 at-bats, but his walks remained OK and his isolated power increased by 40 points. In the 2008 book, I noted his performance but expressed some concern about his strikeout rate, and the fact that despite the power increase, his OPS relative to league actually dropped to +7 from +9 the year before.. However, there was something about Joyce that made me think I had a chance to develop. I wrote "I have no objective evidence for this, but Joyce strikes me as the kind of player who might be a late bloomer, sneaking up on us maybe in '08, but more likely in ‘09".

PECOTA comps aren't glamorous... the best one is Bobby Higginson, showing up at number four on the PECOTA list. PECOTA really hates Joyce, giving him a .226/.306/.404 projection this year. Shandler is much more optimistic at .259/.335/.478 and believes he has 30-homer potential. Given that the Tigers traded Joyce quickly, perhaps they agree more with PECOTA and were selling high.

Personally, I don't think what he did in Detroit last year is a fluke. I think he's a .240.-.260 hitter with solid power from the left side, so my expectation is closer to Shandler than PECOTA. I like the walks, and I like the fact that he doesn't strike out excessively for a guy with power. He's not going to be a star, but he should prove quite useful. Right now he needs to get healthy, as a leg injury has cost him most of spring training.