Not a Rookie: Brandon Jones

Share All sharing options for: Not a Rookie: Brandon Jones 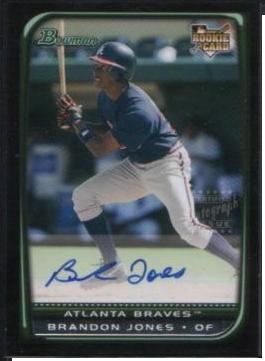 Not a Rookie: Brandon Jones

Brandon Jones was drafted by the Atlanta Braves in the 24th round in 2003, out of Tallahassee Community College. He signed as a draft-and-follow, then made his pro debut in '04, hitting .297/.366/.416 in the Appalachian League at age 20. I did not put him in the 2005 book, but would have rated him as a Grade C/C+ prospect. He had good tools and showed decent plate discipline, but there was some uncertainty about what kind of power he'd show at higher levels.

Jones moved up to the Sally League in 2005, but a broken hand limited him to just 43 games at Rome where he hit .308/.423/.577.. He also spent time on rehab in the GCL and Appy Leagues, and hit great in a late trial at Myrtle Beach with a .350/.437/.417 mark in 17 games. His plate discipline was strong and he had boosted his power production substantially, drawing comparisons to Mike Greenwell and Garret Anderson. I gave him a Grade B in the 2006 book, with the notice that further power development could make him an elite prospect.

Jones split 2006 between Myrtle Beach (.257/.329/.420 in 59 games) and Double-A Mississippi (.273/.326/.477 in 48 games). He didn't show the additional power development I was hoping for, but he improved things like his defense and baserunning., and his OPS still came out quite good in Double-A at +17 percent. I gave him another Grade B entering '07, writing that a consolidation season in the high minors would be a good idea.

Jones walk rate was pretty low during his major league trial, but his strikeouts weren't awful and I think he will get his plate discipline back with more experience. He's having a great spring training at .390/.432/.488. . .but 1) it's spring training and 2) his isolated power is low with just two extra-base hits, most of his production coming off the gaudy batting average in a limited sample size. So I wouldn't say at this point that his spring training numbers indicate big progress in the power department.

All very similar results from the various projection systems.

I can't quantify it or come up with any sabermetric rationale for this. I'm certainly not basing it on the spring numbers, but I think Jones will do better than what the projection systems are showing and could get close to the 90th percentile PECOTA. I wouldn't bet a lot of money on that, or make a huge fantasy investment based on something I can't explain. It's an intuition call, but my intuition says that Jones has a better-than-expected chance to surprise, hitting something like .280/.345/.450 this year, more in line with his 2007 MLE than his 2008 performance.