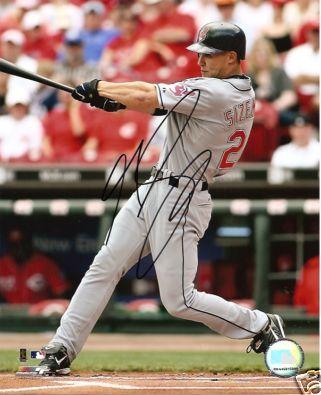 Grady Sizemore was drafted by the Montreal Expos in the third round in 2000, out of high school in Everett, Washington. He was considered a first round talent due to his excellent tools, but he had a football scholarship to the University of Washington, and it took $2,000,000 to convince him to play baseball. He hit .293/.380/.376 with 16 steals in 55 games for the GCL Expos, showing strong speed and strike zone judgment, but not much power. I gave him a Grade C+ entering 2001, noting that he did have some power potential but needed to refine his swing.

Sizemore spent 2001 with Clinton in the Midwest League, hitting .268/.381/.335 with 32 steals, 81 walks, and 92 strikeouts in 451 at-bats. His power was unimpressive, but the plate discipline and speed continued to stand out. Scouts complained a bit about his route-running and said his defense needed work, and also worried that his line drive swing was not conducive for power at that point. I gave him a Grade B-.

2002 began at Brevard County in the Florida State League, where he hit .258/.351/.348 in 75 games. He was traded to the Indians in the Bartolo Colon deal, and the change in organizations seemed to wake him up: he hit .343/.451/.483 in 47 games after the trade. Although he hit just three homers on the season, I wrote that "additional power will make him a Seven Skill guy, and given his size and knowledge of the strike zone, I think it will come." I gave him a Grade B, and wrote "that could be too low a year from now."

Sizemore is a great example of a tools player made good. It took him four years to fully tap into his strength and power, but even in the low minors he always showed good plate discipline. He is one of my favorite players in baseball due to his broad range of skills.