The Recent History of Shortstop Prospects, Part One

Share All sharing options for: The Recent History of Shortstop Prospects, Part One 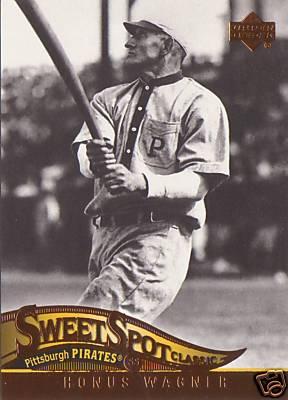 Following up our recent series on catching prospects, let's look at top shortstop prospects and see how they did, beginning with the 1995 STATS Minor League Scouting Notebook, written by Eddie Epstein, then proceeding through the subsequent MLSNs written by yours truly.

1995
Alex Rodriguez, Seattle Mariners    Grade A      1st round pick, 1993, Florida HS
Rated by Eddie as the top prospect in baseball, which was something of a no-brainer. Has obviously lived up to and exceeded every possible expectations, steroids or not.

Alex Gonzalez, Toronto Blue Jays   Grade A      13th round pick, 1991, Florida HS
Rated by Eddie as the number four prospect in baseball. Very long career, offense was held back by poor strike zone judgment, but held a job for a long time.

Enrique Wilson, Cleveland Indians   Grade A-    Free Agent, 1992, Dominican Republic
Rated by Eddie as the number 28 prospect in baseball. This one turned out to be illusionary, as Wilson was not age 19 as advertised.. . .he was one of the Age-Gate busts.

Pokey Reese, Cincinnati Reds      Grade B+     1st round, 1991, South Carolina HS
Rated by Eddie as the number 41 prospect in baseball. Major league regular at short and second for six years, showed speed with occasional op, but never lived up to early expectations.

Mark Grudzielanek, Montreal Expos   Grade B+    11th round, 1991, Trinidad State JC
Rated by Eddie as the Number 45 prospect in baseball. Grudz had done little of note until 1994 breakout season in Double-A. Very long career, can still hit .300 at age 38 but can't stay healthy.

Damian Jackson, Cleveland Indians    Grade B+.  44th round, 1991, Laney College
Rated by Eddie as the Number 50 Prospect in baseball on the basis of his defensive skills and speed. Bounced around for long awhile, stealing bases and handling utility work.

Hiram Bocachica    Montreal Expos   Grade B+         1st round, 1994, Puerto Rico HS
Number 20 prospect in baseball. Solid season in the Florida State League, with a +27 percent OPS, 21 steals, and strong plate discipline. There was talk he might have to switch positions to the outfield, but I was high on his bat. Switched to outfield in 1998. Reached majors in 2000 but injuries and lack of contact consistency prevented sustained success.

Neifi Perez    Colorado Rockies     Grade B+          Free Agent, 1992, Dominican Republic
Number 30 prospect. I gave him props for strong defense and youth, though warned that his bat wouldn't' be as good as it looked due to park effects. Still I expected him to be a regular for a long time due to his glovework.

The Other Alex Gonzalez   Florida Marlins    Grade B+          Free Agent, 1993, Venezuela.
Number 20 prospect in baseball. Similar to the other Alex Gonzalez...showed power, defense, erratic plate discipline. Maybe they are an unknown Cylon model.

D'Angelo Jimenez    New York Yankees    Grade B+     Free agent, 1994, Dominican Republic.
Number 29 prospect in baseball. I loved his strong plate discipline. I was more of a fundamentalist about that back then than I am now. . .less rigid in my thinking as I've grown older. Bounced around a lot, blocked in New York, has had flashes of major league success but certainly no star.

Mike Caruso   Chicago White Sox   Grade B+         2nd round pick, 1996, Florida HS
Number 47 prospect in baseball. Unexpectedly given a major league job in 1998 at the age of 21 with no experience above A-ball. He hit .306/.331/.390 as a rookie, but then fell apart completely, undone by injuries and an apparent loss of confidence. Last sighted playing independent baseball in the Northern League.

The Other Alex Gonzalez   Florida Marlins    Grade B+      Free Agent, 1993, Venezuela
Number 26 prospect in baseball. I prefer Cylon model 6 myself.

Travis Dawkins   Cincinnati Reds   Grade B+      2nd round pick, 1997, South Carolina HS
Number 50 prospect in baseball. Rated highly on the strength of what looked like a breakthrough offensive season to match his glovework. Alas, he could not sustain it.

We will look at prospects from 2001-2006 in Part Two, then at all first round picks during the same period, concentrating on those not mentioned yet in Part Three, then at all starting shortstops who don't get covered in the other categories in Part Four, then draw some conclusions in Part Five.