Share All sharing options for: The Recent History of Shortstop Prospects, Part Four 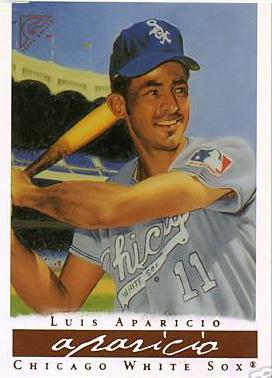 Free Agent, 1994, . A super tools guy, Guzman was pushed fast, hyped by the New York propaganda machine, traded to in the Chuck Knoblauch deal, then thrust into a major league job in 1999 at the age of 21. As a Twins fan, I always found him quite frustrating, as he alternated brilliant performances with awful ones.

Second round pick, 2001, Arizona HS. When drafted, Hardy was a defense-first guy with questions about his bat, and I had doubts about him for some time. His first two seasons weren’t great, but he’s been much more effective since hitting age 24 and should have a long and productive career if he stays healthy.

Fifth round pick, 1997, UC-Santa Barbara. Drafted by the Blue Jays, Young performed very well in the minors right off the bat but never seemed to get quite as much respect as he deserved, with scouts criticizing his defense. Indeed, he spent considerable time at second base and began his major league career there before moving back to shortstop in 2004. Hit .296/.367/.450 in the minors, .300/.346/.442 in the majors thus far.

Free agent, 1999, . Peralta didn’t do much at first offensively, with a very high strikeout rate looking like it would hold him back. But he took a big step forward in Double-A in 2002 at age 20, reducing the strikeouts and boosting his power. After a false start in 2003 he blossomed in ’04 and ’05.

13th round pick, 2001, . Drafted by the Padres, showed speed and athleticism, but spotty offense, though (notice a trend here) he kept the strikeouts under control and had a non-awful walk rate even when he wasn’t hitting. Traded to , he began to blossom in Double-A in 2003 at age 23. He’s not a terrific player but he will be around for a long time, assuming his body holds up.

Fifth round pick, 2001, William and Mary. Harris was considered a promising hitter with defensive issues, which is why he lasted until the fifth round, and indeed shifted between third base and second base throughout his minor league career. Hit .294/.365/.458 in the minors, .269/.330/.408 in the majors.

21st round pick, 1998, . Moved through the Phillies system quickly, showing good glovework, speed, the ability to draw a walk, and a reasonable strikeout rate. Struggled in Triple-A at first, but eventually solved it. Obviously not a great hitter but as a utility guy he has ability, though miscast as a semi-regular third baseman, which is how the Twins used him for awhile. Hit .265/.361/.338 in the minors, .252/.319/.332 in the majors.

Fourth round, 2001, . Drafted by the Pirates, Keppinger was respected for contact hitting skills but was a second baseman in the minors, most people thinking he lacked the range and arm strength for short. Quickly proved a skilled hitter contact hitter, lacking power but seldom striking out and usually hitting for a high average. .322/.375/.422 in the minors, .287/.338/.390 in the majors. Scouts didn’t seem to respect him much even when he was performing well.

Sixth through Ninth Round: ,

It is just one snapshot, but in 2008 Jeter and Lopez were the only two who received significant playing time, as shortstops, who were first round high school picks as shortstops.

We will try to draw some conclusions from this mass of data in Part Five.