Share All sharing options for: The Recent History of Shortstop Prospects, Part Three 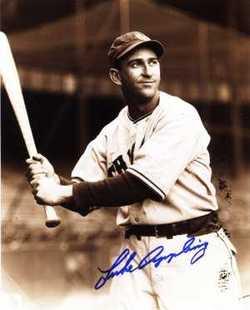 In Part Three of our Recent History of Shortstop Prospects series, we look at all shortstops drafted as shortstops in the first round, 1994-2005. Let's see how they did.

Josh Booty, Florida Marlins, Louisiana HS
5th overall, uber-tools player with a football background. Switched to third base in 1995, showed power but his contact problems and strike zone issues proved insurmountable. Hit .198/.256/.356 in his minor league career, hit .269/.367/.309 in 13 major league games. One of the greatest tools busts in history.

Mark Farris, Pittsburgh Pirates, Texas HS
11th overall. Another tools guy, Farris was considered a slight overdraft at the time due to defensive questions, but still worthy of a first round selection due to an extremely promising bat. Hit .287/.371/.360 in the New York-Penn League, but never built from there, having defensive problems and not showing much power. Was out of baseball by 1999. Career .244/.312/.327 hitter in the minors.

Nomar Garciaparra, Boston Red Sox, Georgia Tech
12th overall. When drafted, Garciaparra was considered an excellent athlete defensive shortstop but it was uncertain exactly how his bat would develop. He hit .267/.338/.384 in Double-A in 1995, showing good plate discipline and a very low strikeout rate but obviously not exceptional performance. He broke out in Triple-A in 1996, then began a terrific run in 1997. The interesting thing here is that even when he wasn't dominating in the minors, his strikeout rate was quite low. Career .293/.357/.471 in the minors, .314/.363/.525 in the majors.

Hiram Bocachica, Montreal Expos, Puerto Rico HS
21st overall. Bocachica was considered very promising with both power and speed potential, but some defensive questions. He performed well at the lower levels, but had some injury problems and stalled out a bit when he reached Double-A. Converted to outfield, then second base, he reached the majors with the Dodgers in 2000 and has bounced around rosters ever since, hitting .215/.272/.356 in 535 major league at-bats, but .288/.373/.471 in the minors. Injuries and contact problems stalled his development.

Kevin Witt, Toronto Blue Jays, Florida HS
26th overall, Witt was drafted for his left-handed power bat. He spent three years at shortstop before switching to first base. He showed lots of power potential, hitting 30 homers in Double-A in 1997 for example, but his strike zone judgment was erratic and his strikeout rate high. He eventually ended up as a productive Triple-A slugger, hitting .272/.334/.499 for his minor league career, but just .233/.267/.376 in 399 major league at-bats.

Ryan Jaroncyk, New York Mets, California HS
18th overall. Jaroncyk was considered to be an excellent defender with a doubtful bat, and that's exactly what happened. He hit .237/.316/.308 in 154 minor league games at the A-ball level. He got so frustrated that he quit baseball in 1997, throwing his equipment in a dumpster. A brief comeback attempt in 1999 and 2000 ended after 20 games. Huge bust.

1996
Matt Halloran, San Diego Padres, Virginia HS
15th overall, Halloran was considered a strong athlete with a good glove, but questionable offensive skills. He had injury problems and never hit, finishing his career in 2001 with a .219/.279/.292 line in 396 games.

Brandon Larson, Cincinnati Reds, Louisiana State University
14th overall, Larson switched to third base quickly which was expected. His bat was very promising, but he had injury issues as well as problems with the strike zone. Proved very effective in Triple-A but couldn't bring this to the majors, where he hit .179/.271/.299 in 291 at-bats. Hit .287/.346/.522 in the minors.

Jason Dellaero, Chicago White Sox, University of South Florida
15th overall, Dellaero was considered an overdraft by most people at the time. He had a good glove and some power, but was not consistently effective in college, and this carried through to the pros, where he hit a mere .210/.256/.340 in his minor league career, undone by horrible strike zone judgment. Hit .091 in 11 major league games.

Adam Kennedy, St. Louis Cardinals, Cal State Northridge
20th overall. Kennedy was considered a pure hitter with defensive questions. He ended up at second base, which was anticipated, and while erratic he has had some major league success, hitting .276/.328/.389 in 1227 games. Not great, but it's a career. He hit .311/.354/.457 in the minors, showing occasional pop with a high batting average but a low walk rate.

Kevin Nicholson, San Diego Padres, Stetson
27th overall, Nicholson was the first Canadian ever drafted in the first round, though he went to college in the US. He was considered OK with the glove but promising with the bat due to unusual power from a 5-9 frame. He struggled in Double-A in 1998, hitting just .215, and aside from a brief trial with the Padres in 2000 he spent the rest of his career in the upper minors, hitting .265/.334/.398, not living up to the potential scouts saw in him. He had decent plate discipline, but had injury troubles.

Troy Cameron, Atlanta Braves, Florida HS
28th overall, Cameron was considered a very promising power hitter but likely to convert to third base. He moved to third in 1998 and indeed showed power, hitting 21 homers that year and 22 in 1999, but strikeouts eventually got the best of him and he seemed to age poorly, his bat topping out in Double-A. Hit .238/.339.420 in the minors.

1998
Felipe Lopez, Toronto Blue Jays, Florida HS
8th overall,. Lopez was considered highly promising on both offense and defense, but somewhat raw. He was pushed fast, playing Double-A at age 20 and perhaps suffered somewhat as a result. His development path wasn't exactly smooth. Major league career has been up-and-down, .262/.330/.395, compared to .279/.341/.430 in the minors.

Josh McKinley, Montreal Expos, Pennsylvania HS
11th overall. This was considered an overdraft by a lot of people. McKinley's athleticism was respected, but scouts doubted his bat. He never reached the majors, hitting .251/.337/.370 before ending his career in 2004. He showed good strike zone judgment and had a nice year in Double-A in 2003 (.288/.367/.467) but things just never came together for him.

Adam Everett, Boston Red Sox, University of South Carolina
12th overall. Scouts expected Everett to be an excellent defensive shortstop with a questionable bat, which is exactly how things have turned out. Hit .259/.346/.368 in the minors, .246/.298/.355 in the majors.

1999
Corey Myers, Arizona Diamondbacks, Arizona HS
4th overall, Myers was rated as an overdraft done for local publicity reasons by most people, though Arizona denied this. He moved to third base in 2000 and had a few flashes of success in the minors, but didn't have the bat for a corner position, hitting .272/.335/.406 through 2007.

2000
Luis Montanez, Chicago Cubs, Florida HS
3rd overall. You can read all about him here

David Espinosa, Cincinnati Reds, Florida HS
23rd overall, considered one of the top players in the draft but with excessive bonus/Boras demands. He ended up signing a major league contract worth $5 million over eight years. I hope he invested the money wisely. Espinosa has been a useful minor league player, hitting .260/.352/.403, showing some on-base ability and occasional pop, but his defense at shortstop proved much worse than advertised, and he simply didn't hit enough to reach the majors after moving to the outfield.

Bobby Crosby, Oakland Athletics, Long Beach State University
25th overall. Had the solid rookie year but hasn't followed that up for various reasons. It will be interesting to see how long he lasts at his current level of performance. Is there any hope for a rebound, Oakland fans?

Josh Burrus, Atlanta Braves, Georgia HS
29th overall, Burrus was a tools player and speedy athlete with questions about his bat. He moved to third base in 2002 then outfield in 2003, A career .243/.317/.364 hitter in the minors, he played in the Can Am League in 2008. Classic tools bust.

Scott Moore, Detroit Tigers, California HS
8th overall. Drafted on the strength of his power bat, he moved to third base in 2003. Too many strikeouts and a low batting average cost him prospect luster. Looking for a utility role now. Career .259/.345/.444 hitter in the minors.

Drew Meyer, Texas Rangers, University of South Carolina
10th overall. This pick was strongly criticized at the time, as Meyer's bat wasn't considered first round quality by most teams, and a weak arm made him a better fit at second base in the opinions of most. A career .262/.320/.348 hitter in the minors, he's never lived up to Texas' expectations.

Josh McCurdy, Oakland Athletics, University of Maryland
26th overall. Part of the Moneyball class, McCurdy hit .443/.496/.826 for Maryland, but with an 18/31 BB/K ratio. . .and indeed, plate discipline proved his Achilles heel in the pros. Hit .253/.302/.365, 2006 was his last season. Good example of how you can't just look at the surface stats in college. . .though even on a sabermetric basis, there were warning signs.

2003
Aaron Hill, Toronto Blue Jays, Louisiana State University
13th overall. Drafted on the strength of his bat, though with the idea that he would probably move to second or third base. College and early pro performance were solid, plate discipline good until he reached Triple-A. .284/.339/.409 major league hitter thus far.

Brandon Wood, Anaheim Angels, Arizona HS
23rd overall. Wood was a "great glove, might not hit" guy until he suddenly started slamming homers in his senior year in high school. Had the monster season in the Cal League, but has been hot-and-cold since then, held back by plate discipline issues and odd handling by the Angels. I still hold out hope for him.

Stephen Drew, Arizona Diamondbacks, Florida State University
15th overall. Would have gone much higher if not for signability issues.

Trevor Plouffe, Minnesota Twins, California HS
20th overall. When drafted, considered a skilled defender who should hit for average with gap power, Plouffe has not thrived by any means, but has reached Triple-A and still has a shot as a utility guy. Career .255/.318/.380 hitter, still young enough to step forward but I'm not holding my breath.

2005
Justin Upton, Arizona Diamondbacks, Virginia HS
1st overall. Converted to outfielder immediately. Immense potential, but like his brother it is still unclear exactly what kind of player he will be.

Cliff Pennington, Oakland Athletics, Texas A&M University
21st overall. Drafted for his speed and on-base ability, but lack of power has prevented him from emerging as a possible regular. I still think he could be useful in a utility role.

Tyler Greene, St. Louis Cardinals, Georgia Tech
30th overall. Greene is a tremendous athlete with speed and power, but was rather raw for a top program college player. Strike zone problems and injuries have held him back. Career .254/.326/.418 hitter with 82 steals in 94 attempts in 377 games thus far.

In Part Four, we will look at all current starting shortstops in the Major Leagues and track their origins. In Part Five we will try to pull all this data together and draw some conclusions.