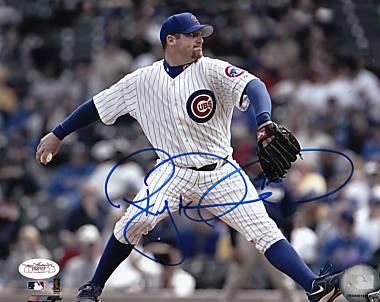 Ryan Dempster was drafted by the Texas Rangers in the third round of the 1995 draft, from high school in British Columbia. His pro debut was successful: 2.36 ERA with 37/17 K/BB in 34 innings for the GCL Rangers, with 34 hits allowed. He drew notice for his above average stuff and reasonable, though somewhat erratic, command. I didn't grade short-season players back then, but a similar guy would get a Grade C+ from me now due to draft position, scouting reports, and good early performance.

The Rangers sent Dempster to Charleston in the Sally League to begin 1996. He performed very well: 3.30 ERA with 141/58 K/BB in 144 innings, 120 hits allowed. He was traded to the Marlins in late July in the John Burkett deal, and was sent to Kane County in the Midwest League, where he went 2-1, 2.73 in four August starts, but with an weak 18/18 K/BB in 26 innings. He was a bit tired down the stretch, but overall it was a good season, Dempster demonstrating a 90+ fastball and a reasonable slider/changeup arsenal. I gave him a Grade B- in the 1997 book.

The Marlins assigned Dempster to Brevard County in the Florida State League in 1997. He went 10-9 but was erratic with a 4.90 ERA and a 131/46 K/BB, with 190 hits allowed in 165 innings. Scouting reports indicated that while his control improved compared to '96, the qualify of his stuff and velocity slipped slightly. I gave him a Grade C in the 1998 book, writing that he still had time to put things together.

Many young pitchers don't recover from a rough beginning, but Dempster turned things around in 1999 with a 4.71 ERA and a 126/93 K/BB in 147 innings. He had a fine season in 2000, winning 14 games with a 3.66 ERA and 209 strikeouts in 226 innings. You know the contour of his career since then: He struggled as a starter, had some health issues, went back to the minors, converted to relief, closed for three years, then moved back to the rotation this year with good results.

As a prospect, Dempster showed a great deal of promise, but he was also erratic, alternating a strong 1996 with a poor 1997. He dominated at times, but also went through bouts of being excessively hittable. This is basically the same thing that has happened in his major league career.