Share All sharing options for: Florida Marlins Top 20 Prospects for 2009 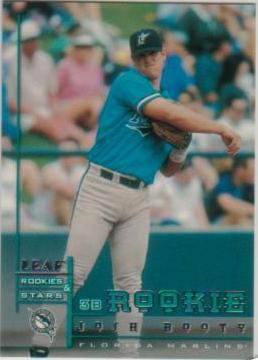 1) Cameron Maybin, OF, Grade A-: He’s got some flaws, but overall I buy into the notion that he will refine his tools into skills. Just don’t expect him to win batting titles.

2) Logan Morrison, 1B, Grade A-: I think people are underrating his power. In 2009, he’ll put everything together, batting average, OBP, and homers.

3) Matt Dominguez, 3B, Grade B+: Close to an A-, impressive power with stellar glove, but have some concerns about his plate discipline.

4) Mike Stanton, OF, Grade B+: Anyone who likes space race history will love the book comment I wrote about him this year. Could be a superstar, could flail helplessly against Double-A pitching, too soon to rate higher than a B+.

5) Kyle Skipworth, C, Grade B+: At this point, I’m not worried about his rookie ball performance. I believe in the bat and his defense will come along with more experience.

6) Ryan Tucker, RHP, Grade B: He needs another pitch if he wants to start, but the ceiling stands out as excellent.

8) Jose Ceda, RHP, Grade B: Yet another high ceiling arm with command issues. Also has to watch weight.

9) Chris Coghlan, 2B, Grade B-: Nice steady contact hitter, won’t be a star but should have a long career.

10) John Raynor, OF, Grade B-: Fast, draws walks, has some pop, negatives are age and high strikeout rate.

11) Eulogio De La Cruz, RHP, Grade B-: Borderline C+, but I’m giving him credit for surviving where so many others have failed. Good stuff, gets grounders, can he correct command issues?

13) Scott Cousins, OF, Grade C+: Has across the board skills, could be a strong fourth outfielder or an average corner guy.

14) Bryan Petersen, OF, Grade C+: Similar to Cousins to some extent, but a year behind him on the development curve. Both are players who deserve more attention.

15) Aaron Thompson, LHP, Grade C+: Could be a C. I don’t like the way his Double-A numbers slipped and I worry about health.

16) Brad Hand, LHP, Grade C+: Young projectable lefty from , I wish the Twins had been able to draft him. Will need time but a fresh high school arm worth tracking.

17) Isaac Galloway, OF, Grade C: Tons o’tools, but may be held back by poor plate discipline.

19) Brett Sinkbeil, RHP, Grade C: Surviving on reputation at this point. I think he is better-suited for relief work than starting. Still has the sinker but just doesn’t dominate.

20) Chris Leroux, RHP, Grade C: Could be a fit in the bullpen sooner than expected, if his command is there.

The Marlins have a large group of potential impact players at the top of the system.

Maybin, Morrison, Dominguez, Stanton, and Skipworth all have the ability to be major league regulars and possible All-Stars. Few teams offer that kind of depth. is potentially the best of all, but may also has the highest risk right now. Morrison is probably the safest, with the others holding a middle position. I expect that Maybin may disappoint some people in 2009, but if they are patient with him and don’t expect him to hit .300, he will have a very long and productive career. As stated above, I think people are underestimating Morrison’s power potential. Dominguez will be a starter on the strength of his defense and power, but if he’s a star or just a good solid regular will depend on how his discipline develops. could be a 40-homer guy, maybe more . .or he could be Rob Deer.

Beyond this group, there are other hitters who should be fine role players or average regulars. . .Coghlan, Sanchez, even Raynor, Cousins, and Peterson have that potential.

The pitchers are a bit less impressive. There are several very live arms, but they all have command problems and given the attrition rate on pitchers, the Marlins could use more depth here. But most teams could.

I do note a relative lack of C+ types, but some of the Cs have the potential to move into that category next year.

Overall, the Marlins are loaded.