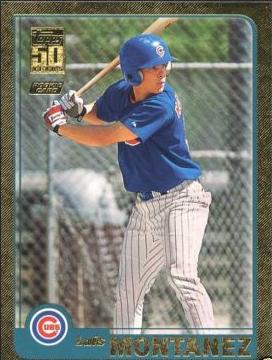 The Cubs drafted Luis Montanez in the first round in 2000. The third overall pick, the high school shortstop from Miami was considered to be a top-notch hitter with above average defensive skills at shortstop as well. He hit .344/.438/.531 for the rookie-level AZL Cubs, living up to his press clippings. I gave him a Grade B in the 2001 book, writing that it was a conservative grade and that I really liked him a lot.

Disappointment set in quickly. Montanez hit .255/.316/.375 for Lansing in the Midwest League in 2001. He had problems with the strike zone, drawing just 34 walks against 121 strikeouts in 499 at-bats. He didn't show as much power as expected, and his defense at shortstop was also substandard, committing 32 errors and showing less range than expected. He did draw praise for his work ethic, but obviously this was not what the Cubs were looking for. I gave him a Grade B- in the 2002 book, hoping that getting away from the cold-weather Midwest League would help him in '02.

Promoted to Daytona in '02, Montanez hit .265/.333/.353, showing improved plate discipline and a lower strikeout rate, but not increasing his production overall. He moved to second base at mid-season, due to continued problems with the glove at shortstop. Scouting reports were not promising: Montanez just didn't seem to have the same bat speed he showed in high school or rookie ball.  I was starting to have serious doubts at this point, lowering his grade to Grade C.

Montanez returned to Daytona in 2003 and didn't improve at all, hitting .253/.305/.333. He appeared completely stagnant as a prospect, showing little pop, weak on-base skills, and ok but not terrific defense at second base and shortstop. I gave him a Grade C in the 2004 book, but noted that time was running out. That might seem rather harsh: he was still just 21, but with no skill growth for three years running, it was hard to see much improvement on the horizon.

The Cubs gave up on Montanez as an infielder in 2004, moving him to the outfield. Sent all the way back to the Northwest League, he hit .297/.381/.496 in 72 games while learning the nuances of his new position. I did not put him the 2005 or subsequent books, and he'd rate as a Grade C prospect all through the next few seasons, since he was repeating levels.

What does the future hold? Montanez turns 27 in December, so he is at his peak now. Although he hit well for the Orioles, I do not like his 4/20 BB/K ratio in 112 at-bats. The strikeouts are not out of bounds, but the walk rate is too low, and major league pitchers will take advantage of his lack of patience eventually. He's never hit that well in Triple-A, and I'd like to see more data from Triple-A and the majors before concluding that he's really truly turned a corner.

In other words, what he did this year was obviously impressive, but I'm not ready to say you should invest a lot of hope or resources in Montanez stock.