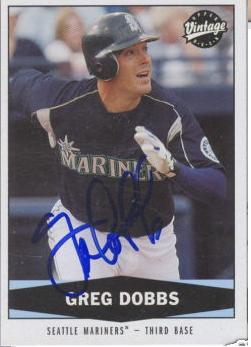 Greg Dobbs had a terrific season for the University of Oklahoma in 2001, hitting .428/.474/.671. A fifth-year senior, he signed before the draft that spring with the Mariners, reporting to Everett in the Northwest League, where he hit .321/.396/.478. I did not put him in the 2002 book since I didn't have space for most short-season players back then, but given his college performance and early pro numbers, he'd rate at least as a Grade C prospect. Scouts liked him, but because he was a five-year college player the general opinion was "wait and see" how he would adjust to higher levels.  There was also question what position he would play, with a chance to be an outfielder, third baseman, or first baseman.

Dobbs began '02 with Wisconsin in the Midwest League, hitting .275/.338/.431 in 86 games. Promoted to Double-A San Antonio late in the year, he hit a robust .365/.425/.542 in his first look at advanced pitching. Scouts praised his bat speed and ability to make contact, and it looked like he'd hit for at least average power. Defense was still a question, as he played awkwardly at third base but looked better in the outfield. I gave him a Grade B- in the 2003 book.

Unfortunately, 2003 was a lost season, Dobbs missing all but two games in Double-A due to a blown achilles tendon. I didn't put him in the 2004 book for space reasons. I would have lowered his grade to C+ due to the injury uncertainty plus the fact that he was now 25.

The Phillies claimed him, and he has performed very well as a platoon bat over the last two seasons. His career mark is now .276/.320/.434 in 772 games, though of course that includes his early Mariner struggles and he's been more effective than that over the last two seasons, hitting .284/.331/.467 for the Phils. HIs defensive versatility is helpful, especially for a National League team. His strike zone judgment is still spotty, and his struggles against left-handed pitching limit him to a platoon role, but he should be in the majors for several more years, hitting in the .275-.300 range with spikes of power. Some players like this get trapped in Triple-A, but sometimes a player gets some slack and makes the most of it.