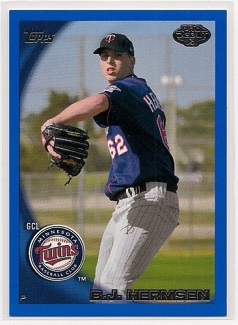 A sixth round pick in 2008 out of high school in Manchester, Iowa, Hermsen is a big guy at 6-5, 240. Despite his size, he isn't a hard-thrower, working in the upper-80s on most days, albeit with sharp command. Scouts have hoped his velocity would pick up but that's only happened slightly since high school. On the other hand, his curveball, slider, and changeup have all shown progress this year, and he's been very durable.

Right-handers without plus fastballs are often discounted, but Hermsen is still just 21 years old, throws strikes, and is developing a feel for his craft. Intriguing potential remains.

**A pitcher along similar lines is Colorado Rockies prospect Parker Frazier, 11-11, 4.44 in 148 innings for High-A Modesto, with a 105/46 K/BB, 162 hits allowed, and a 1.36 GO/AO. An eighth-round pick in 2007 from high school in Tulsa, the 6-5, 160 pound right-hander is the son of former major league pitcher George Frazier. He is fully recovered now from 2009 Tommy John surgery. Frazier has an upper-80s, low-90s sinker with good movement, as well as a solid slider. He is working on his changeup and may end up as a reliever at higher levels, although he's eating innings well this year. He's 22, and while his statistical performance has never quite matched his reputation with scouts, the "throws strikes, gets grounders" combination is still worth watching.

**Another strike-thrower worth tracking (notice today's theme) is Cleveland Indians prospect Preston Guilmet, currently closing for High-A Kinston, with 33 saves, a 1.63 ERA, and a sharp 56/9 K/BB in 55 innings with just 39 hits allowed. A ninth round pick in 2009 from the University of Arizona, Guilmet has exceptional command but doesn't throw hard for a right-hander at 87-91. However, he has a good slider and a terrific splitter, and he's been way ahead of the competition in A-ball. At 24 he is old for the level, but I think he has a decent chance to surprise, profiling as a middle reliever in the majors.

**Phillip Irwin was a 21st round pick by the Pirates in 2009 from the University of Mississippi. A 6-3, 220 pound right-hander, he was strong early in the year for High-A Bradenton, going 5-0, 2.03 with a 40/12 K/BB in 53 innings with 47 hits allowed and a 1.40 GO/AO. Promoted to Double-A Altoona, he is 7-4 in 12 starts, but has had enough rough outings to boost his ERA to 4.42. He's given up 80 hits in 75 innings, but also has an impressive 61/9 K/BB ratio and a 1.53 GO/AO. His velocity is pedestrian, but he keeps the ball down, throws strikes, and has had some high strikeout games lately, fanning nine on August 24th and seven on August 13th. Although he profiles as a fifth starter or long reliever, pitchers like this can sneak their way into unexpected success. Irwin is a more effective minor league pitcher than Doug Fister was, for example, and we saw what he was able to do.