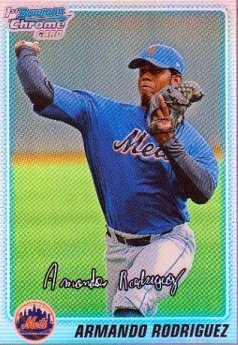 Let's review the Sleeper Alert! list from the 2011 book (which you can still order by the way!). Here is the last part of the list.

I'm including a brief mention for each player of the reasons they were on the list, if it was stats, scouting reports, intuition, or some combination thereof.

Crawford Simmons, LHP, Kansas City Royals: Limited to just 10 innings this year by a sore elbow, was recently activated and pitched an inning in the Arizona Rookie League on July 9th. Age 20. Rating was based on stats and scouting.

Matthew Thomson, RHP, Oakland Athletics: Has pitched just four innings this year for Low-A Burlington, currently on DL. Age 23. Rating was based on stats and scouting.

Joe Wieland, RHP, Texas Rangers: 2.09 ERA with 113/11 K/BB in 108 innings between High-A Myrtle Beach and Double-A Frisco, 103 hits. Outstanding breakthrough season at age 21. Rating was based on stats and scouting.


This final group of 15 is better. There's a huge breakout with Wieland and several others have performed well. Watch Eddie Rosario closely, I really like him a lot.