Prospect of the Day: Paul Goldschmidt, 1B, Arizona Diamondbacks

Share All sharing options for: Prospect of the Day: Paul Goldschmidt, 1B, Arizona Diamondbacks 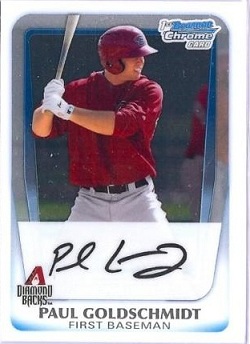 Goldschmidt was drafted in the eighth round in 2009 from Texas State University, where he holds the school record for career home runs. He was quite successful in college, but scouts didn't like his 6-3, 245 pound body, and many felt he would strike out too much against pro pitching, plus right-handed hitting first baseman have to really impress scouts to rank highly on draft day . He hit .334/.408/.638 in the Pioneer League after signing, but there were still plenty of skeptics due to the pro-hitting nature of that rookie-ball circuit. Moved up to the California League in '10, he responded with a .314/.384/.606 mark, with 35 homers, for Visalia. However, doubters pointed out that he struck out 161 times in 525 at-bats, a very high ratio, and many scouts weren't convinced he could handle advanced pitching in a less-friendly environment.
It hasn't been a problem.
As noted above, Goldschmidt is bashing the ball again this year, hitting for average and power. He's doing it in a more difficult environment against better pitching, and he's shown dramatic improvement in his plate discipline and contact ability: he's drawn 41 walks already, compared to 57 all last year, and he's cut his strikeout rate by a huge amount, just 36 whiffs in 188 at-bats. He's reduced his strikeout rate from 31% of his at-bats to 19%, while improving his already-stellar production numbers across the board. He's especially deadly against left-handed pitching, hitting .404 with a 1.021 SLG this year; he hit .413 with an .860 SLG last year.
Goldschmidt's glove is better than you might expect given his size: he has some mobility, and makes few errors, just one so far this year. While he'll be limited to a first base/DH role in the majors by his lack of running speed, his bat looks truly outstanding. Juan Miranda isn't a long-term solution at first base for Arizona, but Goldschmidt looks like the answer.