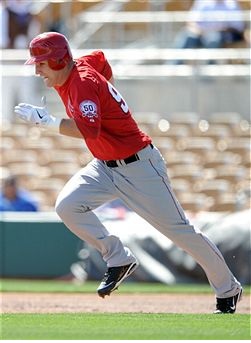 **Time for a Mike Trout update. The Angels prospect is on a tear for Double-A Arkansas right now, hitting .447/.500/.789 in his last ten games, including three walks and seven steals in eight attempts. On the year, he's hitting .329/.431/.559 with 33 walks in 213 at-bats, with 23 steals in 29 attempts. He has an 1.016 OPS against lefties, .977 against right-handers. He's also played error-less ball in center field, with three assists, an excellent range factor, and strong reviews from scouts for his glovework. Basically, he's making mincemeat of the Texas League in every respect, and the question now is how long before the Angels promote him to Triple-A? Trout is such a good prospect, he can probably even give you a precise definition of mincemeat.

**Texas Rangers outfield prospect Jake Skole, drafted in the first round 15th overall last year out of high school in Georgia, has been hot in June with a .311/.396/.467 line overall for Low-A Hickory, with seven walks and just six strikeouts in 45 at-bats. His overall line for the season is .264/.365/.350; his power hasn't been too good overall, but note the SLG increase in June, granted the caveats of sample size. Skole has drawn quite a few walks with 31 so far, and he has an unusual reverse platoon split, hitting .392/.466/.529 against lefties but just .219/.311/.288 against right-handers, very unusual for a young left-handed hitter. Scouts say he has good power potential but pointed to the need for swing adjustments pre-season in order to tap into his strength. Given his youth and his already-present strike zone judgment, I am optimistic that Skole will develop.

**In contrast to Skole, Colorado Rockies outfield prospect Kyle Parker has seen his plate discipline slip in June for Low-A Asheville, with one walk and 16 strikeouts in 47 at-bats. He's hit two homers this month but his line of .213/.245/.362 is disappointing, especially considering his fast start to the year that was sparking rumors of rapid promotion up the ladder. Overall he's hitting .274/.336/.447, but with an unattractive 16/64 BB/K in 215 at-bats. He's also had some problems on defense, committing seven errors in right field already, though he also has four assists. The former Clemson quarterback isn't as polished as your average major college outfielder. His upside as a slugger remains impressive but hope that he could reach Coors Field quickly appear misplaced.

The son of former major league outfielder Greg Vaughn, Cory has excellent tools but his erratic college performance at San Diego State dropped him to the fourth round in the 2010 draft. He has an especially sharp platoon split (1.066 OPS against lefties, .777 against right-handers), and has also been much more effective on the road (.946) than at home (.756). Even at this point of the season, the sample sizes with these splits aren't necessarily meaningful. Scouts were pleased with the improvements he made to his swing after signing last year, and while his isolated power is down in the Sally League, but I remain pretty optimistic about his chances.