Prospect of the Day: James Darnell

Share All sharing options for: Prospect of the Day: James Darnell 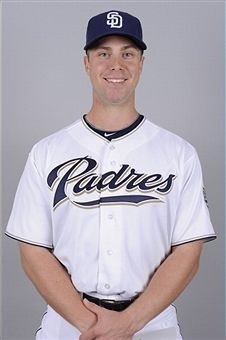 Prospect of the Day:

James Darnell, 3B, San Diego Padres
One of the hottest hitters in the minor leagues so far in 2011 is James Darnell, third baseman for the Double-A San Antonio Missions of the Texas League. Through 11 games, the Padres prospect is hitting .500/.596/.750 (20-for-40) with seven doubles, a home run, 11 walks, and just one strikeout.

He's maintained the hot hitting to open 2011 and I don't think it's a fluke. Darnell has outstanding plate discipline (remember 11 walks, just ONE strikeout this year) and enough bat speed to hit for at least decent power. He's now a career .307/.408/.502 hitter in 260 minor league games, and I think he'll continue to hit as he moves up.

His main weakness is defense. Although Darnell has enough range and arm strength for third base, he simply makes too many mistakes, particularly with errant throws. He's already made three errors this year and has a career .905 fielding percentage at third base, which is quite inadequate. There has been talk of him becoming a second baseman or corner outfielder if he can't solve that problem, but so far the Padres are keeping him at third.

Darnell's bat looks too good for Double-A right now, but there's currently no spot open for him in Triple-A, with veteran Jesus Guzman hitting well for the Tucson Padres. Darnell is likely to remain in San Antonio for awhile longer, working on his defense at the hot corner. It remains to be seen how the Padres will get him into the major league lineup, but his bat should be ready for a trial within the next year. He could also be very tasty trade bait.