Not a Rookie: B.J. Upton

Share All sharing options for: Not a Rookie: B.J. Upton 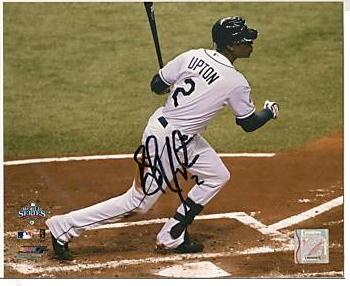 Not A Rookie: B.J. Upton

B.J. Upton was drafted by the Tampa Bay Devil Rays in the first round in 2002, second overall, out of high school in Chesapeake, Virginia. He was considered an excellent all-around athlete, and at the time was rated as an above-average defensive shortstop. Scouts weren't sure how much power he would show at higher levels, but they expected him to hit for average, get on base, and steal plenty of bags, comparing him to a young Derek Jeter. I gave him a Grade B in the 2003 book pending some pro performance, as he signed too late to play in '02.

Upton began 2003 with Charleston in the Sally League, hitting .302/.394/.445 with 38 steals. Promoted to Double-A Orlando for August, he held his own with a .276/.376/.381 mark. Scouts were full of praise for his bat: he showed good plate discipline and developing power. His range and arm strength were evident on defense, but he was having a lot of trouble with routine plays. Some scouts felt this would get better with time, while others were already discussing a move to third base or even the outfield. I gave him a coveted Grade A in the 2004 book, very confident in his future.

If you'll remember back then, there was some concern that Upton might not live up to early expectations. His bat came alive again in 2007, as he hit .300/.386//508 with 22 steals and 24 homers, splitting his defensive time between second base and center field. He finally settled in as a full time outfielder in '08, hitting .273/.383/.401. . .his power dropped off, but that seems to be related to a shoulder injury, and he was devastating in the post-season.

What should we expect from B.J. Upton in the future? That's actually a good question: at his best he's terrific, but his track record is rather erratic. He made a big improvement with his strike zone judgment last year, boosting his walk rate while cutting his strikeouts. That will help. The main concern seems to be the shoulder again. He's expected to be back in game action within 10 days, but you never know what kind of impact that will have, and I'm concerned that durability may be a frequent problem for him.