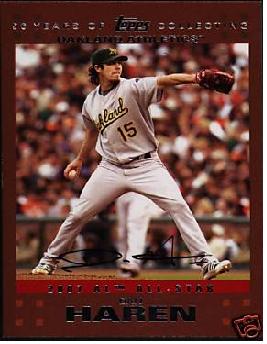 Dan Haren was drafted in the second round in 2001, by the Cardinals out of Pepperdine University. Some teams considered him as a late first-rounder, but the '01 class was considered rich in pitching and Haren fell to the second round, 72nd overall. He had been very successful at Pepperdine, going 11-3, 2.22 with a 97/31 K/BB in 130 innings on the season. A big guy at 6-5, 220, he worked in the 90-92 range in college but would occasionally get up to 94-95, also showing a good splitter, curveball, and changeup. He continued to pitch well in the New York-Penn League after signing, posting a 3.10 ERA with a 57/8 K/BB ratio in 52 innings, demonstrating excellent command. I gave him a Grade B- pending some higher-level data, writing that he "doesn't have the ceiling of some guys," but would likely advance rapidly through the system. I thought he'd be a command-oriented inning-eater type.

As you know, Haren has pitched great the last four years. His strikeout rate continues to creep upward (6.8 K/9 in '05, followed by 7.1, 7.8, and 8.6) with concurrent improvements in his control. While Haren isn't the most overpowering pitcher around in terms of pure velocity, his combination of fastball command with his cutter, slider, curve, and changeup gives him a complete arsenal that he knows how to use. He's been remarkably durable.

All of those guys were good pitchers, though several lacked durability beyond this age.

Again, all of those guys were good, even great, pitchers. Hall of Famers Perry and Jenkins were remarkably durable, with borderline candidates Mussina and Morris also having very long careers. A lot of the others hit the wall around age 30.

Which way will Haren break? I don't pretend to know. Historically the odds are against him, but there's no evidence in the current numbers of any imminent breakdown. If he lasts long enough, as long as Mussina or Morris, he would be a borderline Hall type. You can say that about a lot of successful pitchers, of course. . .few are able to show that kind of durability.