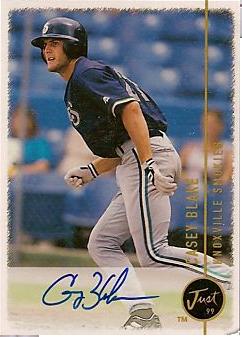 Casey Blake was drafted by the Blue Jays in the seventh round in 1996, out of Wichita State University. He was considered to be a fine athlete with good defensive skills at third base, but a questionable bat: scouts were worried that he couldn't hit with wood. A college senior, he was sent directly to the South Atlantic League after signing, hitting .250/.318/.372 in his 48-game pro debut. This was hardly strong performance, but he skipped the short-season level entirely and considering that he did OK. Strike zone judgment was a problem: he drew just 11 walks against 40 strikeouts in 172 at-bats. He would rate as a Grade C prospect at that point, pending more pro data. I was very aware of him, since he went to high school in Iowa and since I saw him play a lot in college.

Blake returned to Dunedin in 1998 and was a totally different player, hitting .350/.409/.547 in 88 games. He kept this up after moving to Double-A, where he hit .372/.442/.628 in 45 games. Scouts attributed this offensive outburst to a revamped batting stance, as well as greater confidence: Blake had a reputation for putting too much pressure on himself, and needed to relax more. Despite the gaudy numbers, I was still concerned about his past track record and moved his rating up to just a Grade C+ in the 1999 book.

As a prospect, Blake was something of a late bloomer. He was rated as a fine athlete when young, but took time to figure out the offensive side of the game.