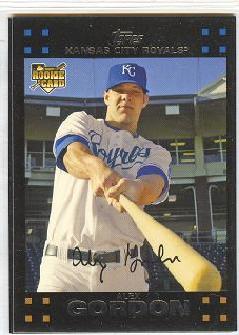 We had just 18 entries in the Alex Gordon Community Projection. . .interest in these seems to be waning. We'll still do a few more.

Sim Scores bring up some of the same names: Joy Foy, Howard Johnson, Tim Wallach, Gary Gaetti, Darnell Coles, Dave Henderson, Mark Teahen, Doug Rader, Willie Jones, and Steve Garvey are his top ten. Absent a catastrophic injury, I can't see Gordon being done by age 28 as Foy was, but the other comps make some sense.

I find it interesting that Wallach and Gaetti show up on both lists. While Gordon may not develop into the George Brett clone that Royals fans were hoping for, there isn't anything wrong with a Chavez/Glaus/Evans/Gaetti/Wallach type outcome.

Gordon had a strong 2008 second half and I think he has a reasonable chance to break out big this year, exceeding what the projection systems are showing.  If he doesn't and maintains his current level of performance instead, he should still have a long and productive career in line with the various comps.