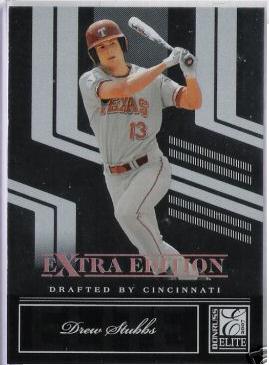 Drew Stubbs was drafted by the Cincinnati Reds in the first round in 2006, from the University of Texas. The eight-overall pick in the draft, Stubbs showed excellent tools and a power/speed combination in college, but he also showed a propensity to strike out. Some scouts worried that his long swing might not translate well against pro pitching, but his athleticism was too much for the Reds to pass up. He hit .252/.368/.400 with 19 steals in 56 games in the Pioneer League after signing, with 32 walks but 64 strikeouts in 210 at-bats. I gave him a Grade B- in the '07 book, writing that Stubbs had a high ceiling but "is a dangerous player to grade" since he could blow up just easily as he could develop.

Stubbs spent all of 2007 with Dayton in the Midwest League, hitting .270/.364/.421, with 23 steals, 69 walks, and 142 strikeouts in 497 at-bats. He drew raves for his excellent outfield defense, but scouts remained concerned about the bat, due to a long swing and problems against breaking pitches. His overall production wasn't terrific, +13 percent OPS, but the high strikeout rate was worrisome. I left him at Grade B- in the book this year, still wondering if he would make sufficient contact against better pitching.

The Reds sent Stubbs to Sarasota in the Florida State League to begin 2008. He hit .261/.366/.406 with 27 steals in 303 at-bats, with just five homers. He did draw 50 walks, with 82 strikeouts, and continued to impress observers with excellent glovework. His performance was similar to what he did in '07, with a +10 percent OPS. Promoted to Double-A Chattanooga, he hit .315/.400/.402 in 26 games, demonstrating good plate discipline but still not much home run power. He moved up to Triple-A Lousiville in August and hit .293/.354/.480, interestingly showing more power but weaker plate discipline with the worst walk rate of his career. The Double-and Triple-A sample sizes are small, of course. Overall on the year, he hit a combined .277/.371/.417 at three levels, with 33 steals, 67 walks, and 123 strikeouts in 470 at-bats. He hit just seven homers, but knocked 33 doubles.

I suspect I will keep Stubbs at Grade B- in the 2009 book. We still have unanswered questions here. The defense and speed are going to carry forward to the majors. But strikeouts and batting average are still concerns, and it is still unclear how much home run power he's going to develop. The power spike in Triple-A is interesting, though again with a 19 game sample size it's hard to conclude that something real changed. It could just be statistical variation, though the fact that his production didn't decline is certainly a good marker.

So, can Stubbs be a regular? I think if you stuck him in the lineup in 2009, he'd hit something like .245/.325/.380, though he's steal a few bases and play great defense. Perhaps he could be something like Carlos Gomez, with a few more walks.