The 92 pitchers listed a bit further down finished their 2018 minor league campaign at least a standard deviation above their league(s)'s average overall performance for a starting pitcher per my Fielding- and Ballpark-Independent Outcomes (FaBIO) statistical evaluation system, while facing at least 300 batters and averaging at least 15 batters faced per game (note that these thresholds disqualify just about all short-season pitchers and 2018 draftees). This now annual FanPost will follow a similar tack as the corresponding ones from 2017 and 2016 and 2015 did.

Each nonbunt, non-pitcher-batting plate appearance is sorted into 1 of the following 12 categories, and the pitcher is charged with the league's typical 2018 runs value for said event.

Each pitcher's final runs per plate appearance value is compared to the league peer group's mean and standard deviation for that parameter to obtain their Overall Rating. A Batted Ball Rating is determined similarly after omitting all BB+HBP or K events (individual components of the Batted Ball Rating are also computed such as GB Rating, IFFB Rating, etc., using GB per batted ball, IFFB per batted ball, ... to better understand how the Batted Ball Rating was attained and assess its sustainability). A Control (CTL) Rating (using BB+HBP per PA) and Strikeout (K) Rating (using K per PA) are also determined. A Youth Rating is determined by comparing the pitcher's age relative to the mean and standard deviation for SPs in their league. The Overall Rating will also be presented when limited to how each pitcher rated against opposite-handed batters (OHB, LHB for a RHP and RHB for a LHP) and against same-handed batters (SHB).

Tyler Ivey took top honors, edging out fellow 100 Overall Rating earner Chris Paddack of the Padres (a rather well-known and rather unique prospect would have edged out Ivey if he had faced a single batter more in 2018). That Erik Swanson, Zac Lowther, and Taylor Widener each sport a heavier flyball bias places some extra pressure on rating respectably to well at CTL, LD avoidance, and Pull OFFB avoidance beyond simply carrying their K/IFFB success forward. 2017-Marlin-turned-2018-Yankeee Michael King was the lone 2018 qualifying SP to rate "triple green" at the CTL/K/BATTED BALL trinity. 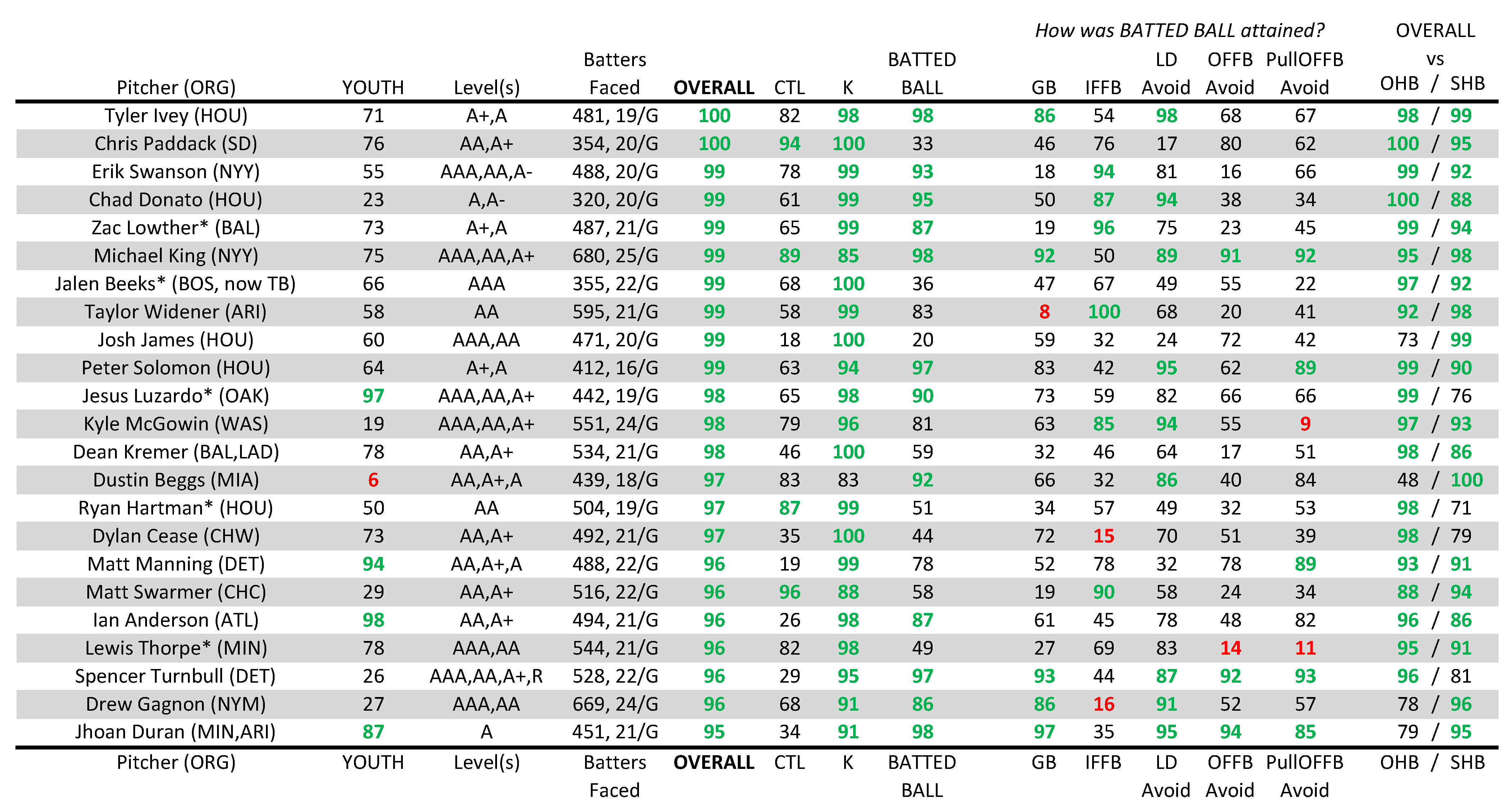 These 23 plus plus or thereabouts to better performers feature three returnees from the 2017 list of MiLB SP who were plus or better on Overall Rating (and faced 300+ batters and 15+ batters per game): Jalen Beeks, Widener, Dylan Cease. The top 23 also includes three 2017 draftees: Ivey, Lowther, Peter Solomon. 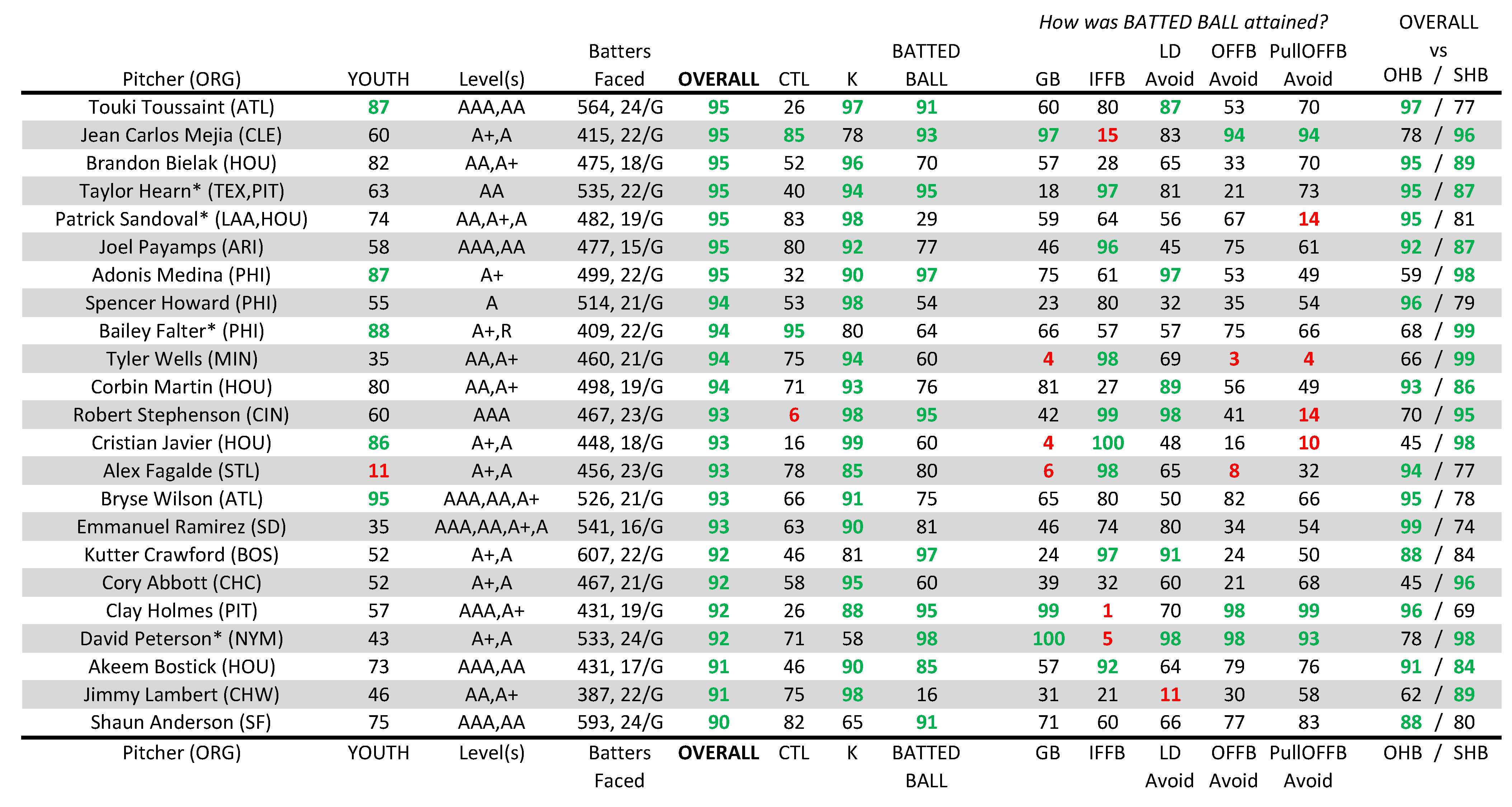 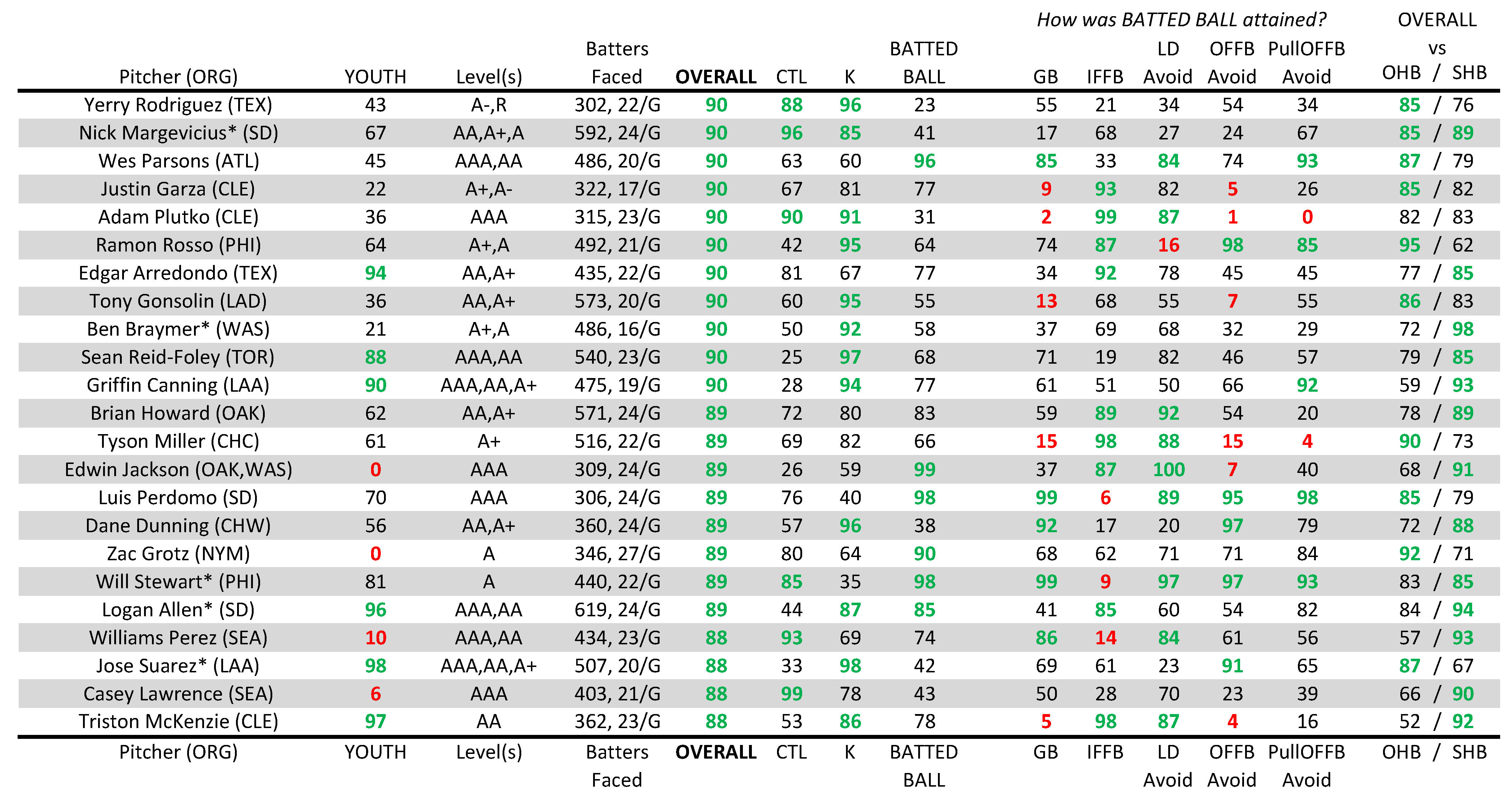 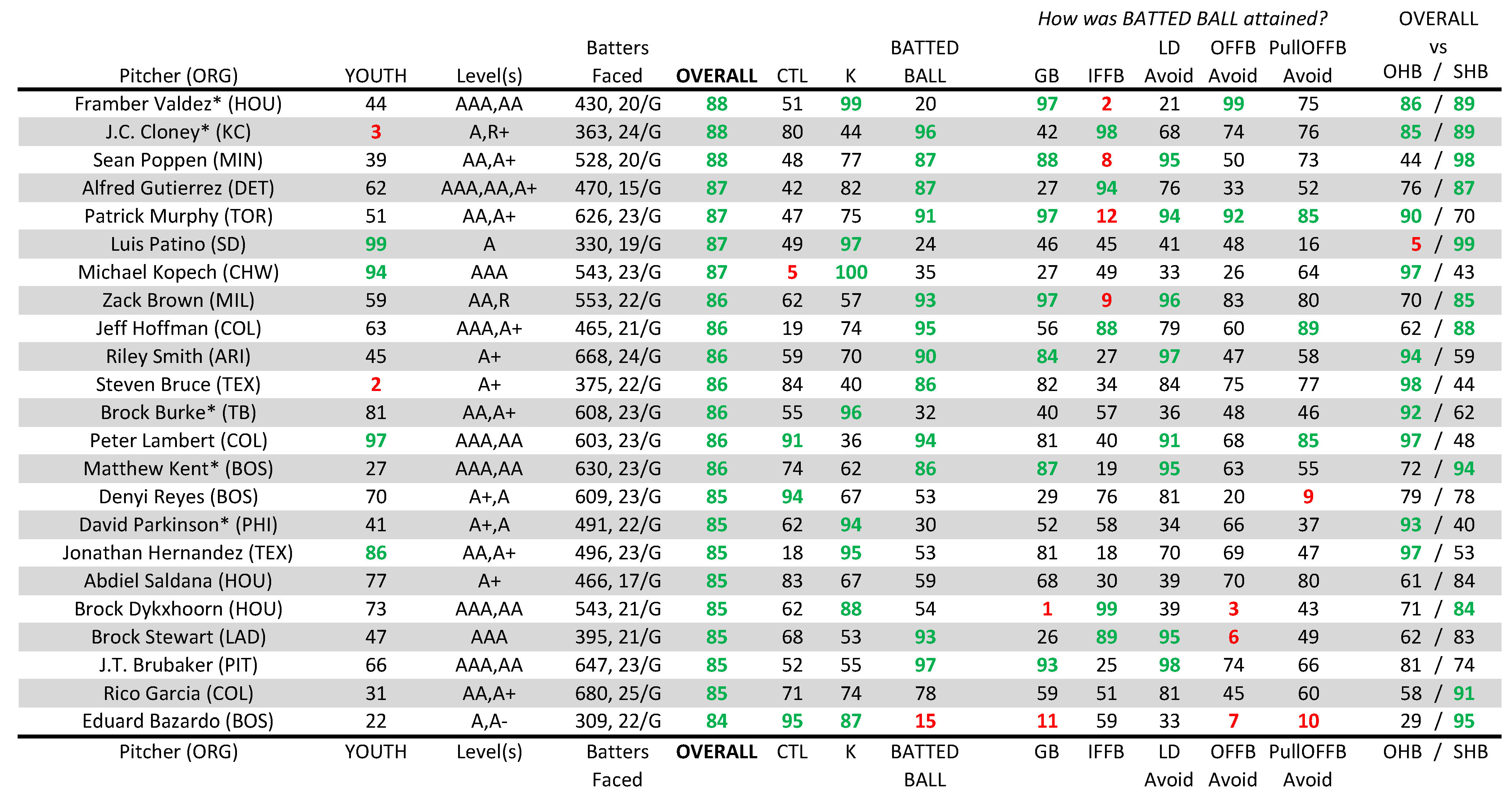 Leaderboard topper Jesus Luzardo had not appeared in a full-season game prior to 2018 and made it all the way to AAA after skipping lower full-season A ball altogether; Luzardo posted a 94 Overall Rating across 178 A- (New York Penn League) and R (Arizona League, Gulf Coast League) batters faced in 2017. The 2 repeat members of this exclusive club from 2017 are Triston McKenzie and Michael Kopech. McKenzie also made the list in 2016, as did Sean Reid-Foley; Kopech posted a 99 Overall Rating then but fell 59 batters shy of the 300 minimum. The lone 2017 draftee to join the club in 2018 was Griffin Canning. The Braves led the way rostering 3 of the 19 pitchers. The Phillies, Rangers, Angels, and Padres placed two apiece.

2016 prep 1st-rounders Matt Manning and Ian Anderson sported more than a few FaBIO similarities in 2018. Jhoan Duran posted a green number in 9 of the 12 columns but could stand to bolster his OHB approach a few ticks during 2019. While forfeiting his first option year during 2019, Adonis Medina should be prodded to develop a stronger OHB game so as to bias his future more in the direction of a mid- to front-of-rotation MLB SP. As a southpaw who stands to face 80% RHB in a starting role, organization-mate Bailey Falter will need to develop stronger OHB weaponry during his pre-40-man-rostering 2019 campaign. An extreme K/IFFB/OFFB profile and forward performance splits have Cristian Javier projecting as a power relief option at the MLB level. Canning could also stand to refine a better anti-LHB offspeed offering in his 2019 return to AAA. The 57 OHB Overall Rating of McKenzie was down from a 85 in 2017 and a 94 in 2016. The 2018 FaBIO scorecard of Luis Patino is rather erratic what with a 99 SHB Overall Rating opposed by a 5 OHB Rating; such extreme forward splits coupled with a half minus to minus batted ball profile has the undersized, albeit inexperienced, righty projecting much more in the direction of short relief than starting at the MLB level for the moment. The 3 present strengths of Peter Lambert are control, a GB-biased and weak-contact-skewed batted ball profile, and opposite-handed batter performance.

Sorting the 92 Pitchers By 2018 MiLB Organization

The Astros placed a whopping 12.7 pitchers (the decimal places reflect partial season credit for traded players) on the 2018 list of 92 after claiming 6 spots a year ago. Combining the 6 each of the next 2 most frequently-appearing organizations (Phillies, Padres) on the 2018 list would still not top the Astros total. The Yankees placed 2 pitchers within the top 6 but could muster no others in 2018 after leading the way with 8.9 pitchers (out of 90) in 2017.

Every organization landed at least one pitcher on the list.

This exercise involves combining the FaBIO ratings of every full-season "starterish"-workload pitcher in the same organization to arrive at a typical SP profile for that organization's 2018 full-season affiliates. Beyond identifying organizational developmental biases, the results reflect some combination of how much SP talent the given organization has on hand at these levels and how well the organization elicits performance out of its SP. Each rating is again expressed on a percentile basis, with the 2018 rank among all 30 organizations at the relevant rating included in parentheses. At the far right of the table that shortly follows, one can spot and compare the 2017, 2016, and 2015 Overall Ratings (Ranks) for full-season SP of each organization.

The Astros unseated the two-time defending champions Yankees by posting the highest Overall Rating (83) that any organization has in the 4 seasons that this exercise has been carried out (topping the Yankees' 77 Overall Rating of 2016). The typical Astros full-season SP rated in the 83rd percentile on Overall Rating and a staggering 91st percentile at K Rating. The Top 5 organizations by Overall Rating (HOU, PHI, NYY, ATL, SD) also ranked within the Top 5 on Youth Rating, signaling that they were also assigning/promoting their pitchers aggressively as the season played out. Full-season SP of the Phillies, Braves, and Padres have come a long way since ranking among the bottom five 2015 organizations. The biggest organizational Overall Rating risers versus 2017 were the Diamondbacks (up 13 spots, from 21st to 8th), Cubs (up 13, from 22 to 9), Mets (up 11, from 29th to 18th), and Twins (up 10, from 17th to 7th). 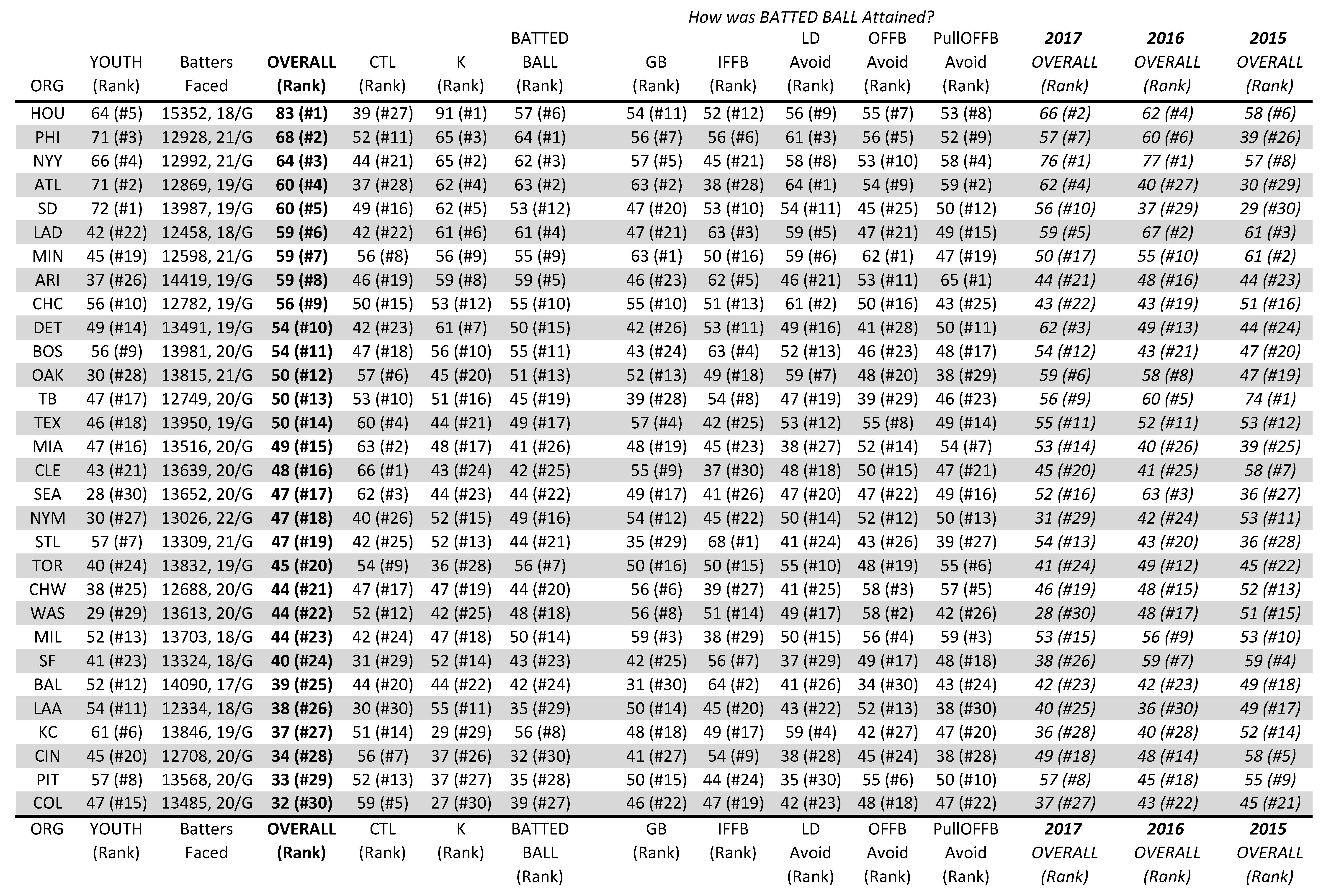 FaBIO has narrowed the candidates down to this dozen taking into consideration batters faced, experience, level of competition, Overall Rating, K, batted ball profile, OHB Overall Rating, control, and so on.

Among these nominees, who receives your vote for 2018 FaBIO MiLB Starting Pitcher of the Year?