The 95 pitchers listed a bit further down finished their 2016 minor league campaign at least a standard deviation above their league(s)'s average overall performance for a starting pitcher per my Fielding- and Ballpark-Independent Outcomes (FaBIO) statistical evaluation system, while facing at least 300 batters and averaging at least 15 batters faced per game (not many short-seasoners qualify accordingly). This FanPost will follow a similar tack as the corresponding FanPost from last offseason did.

Each nonbunt, non-pitcher-batting plate appearance is sorted into 1 of the following 12 categories, and the pitcher is charged with the league's typical 2015 runs value for said event.

Each pitcher's final runs per plate appearance value is compared to the league peer group's mean and standard deviation for that parameter to obtain their Overall Rating. A Batted Ball Rating is determined similarly after omitting all BB+HBP or K events (individual components of the Batted Ball Rating are also computed such as GB Rating, IFFB Rating, etc., using GB per batted ball, IFFB per batted ball, ... to better understand how the Batted Ball Rating was attained and assess its sustainability). A Control (CTL) Rating (using BB+HBP per PA) and Strikeout (K) Rating (using K per PA) are also determined. A Youth Rating is determined by comparing the pitcher's age relative to the mean and standard deviation for SPs in their league. The Overall Rating will also be presented when restricted to how each pitcher rated against opposite-handed batters (OHB, LHB for a RHP and RHB for a LHP) and against same-handed batters (SHB).

Let us begin with the Top 24 placers on Overall Rating. Jose De Leon moved up the lone spot that he could have after finishing second on this list a year ago to new teammate Blake Snell. Fellow recent Rays' acquisition Kevin Gadea is this year's runner-up, though as a rule 5 selection he will have to beat the odds and stick in the big leagues to avoid a return to the Mariners system where he has yet to pitch above low A play. The 2016 FaBIO lines of Brock Stewart and Luke Weaver were remarkably similar and one has to wonder why the still relatively new to starting pitching Stewart continues to receive so little attention in top prospecting circles. With the placement of Jharel Cotton, the 1st, 3rd, and 8th pitchers on this list were at times during 2016 members of the same Oklahoma City rotation (raise/bonus due for pitching coach). After an elbow injury and subsequent Tommy John surgery limited Fernando Romero to facing only 50 Midwest League (A) batters in 2014 and nary a 2015 batter, Romero returned to the Midwest League in late May 2016 only to dominate that circuit (100 Overall, 242 BF) and later the A+ Florida State League (98 Overall, 103 BF). 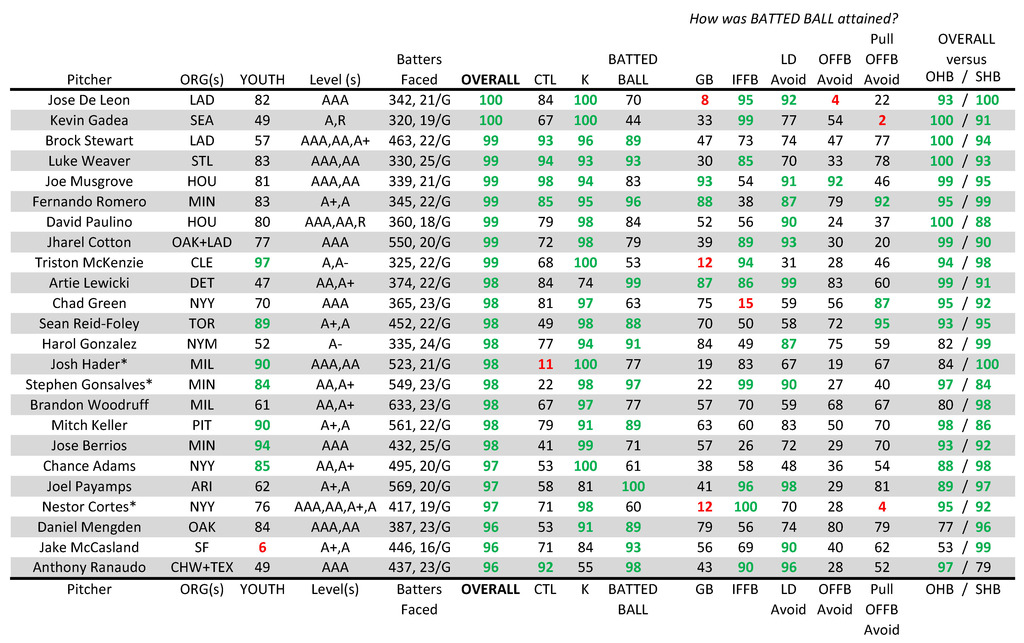 These two dozen plus plus or thereabouts to better performers featured 7 returnees from the 2015 list of MiLB SP who were plus or better on Overall Rating (and faced 300+ batters): De Leon, Joe Musgrove, Cotton, Chad Green, Josh Hader, Jose Berrios, and Daniel Mengden.

The next table of number 25 through 48 overall performers is topped by a potential 2017 breakout arm in Rangers' southpaw Brett Martin. Luis Cessa (94 Overall) lands here to join the aforementioned Green with whom he was dealt last offseason by the Tigers for MLB lefthanded reliever Justin Wilson. The lone repeaters from the 2015 list among this two dozen are Tyler Glasnow (who really is very tough to square up for such a non-GBer), Aaron Wilkerson, and Brady Rodgers. 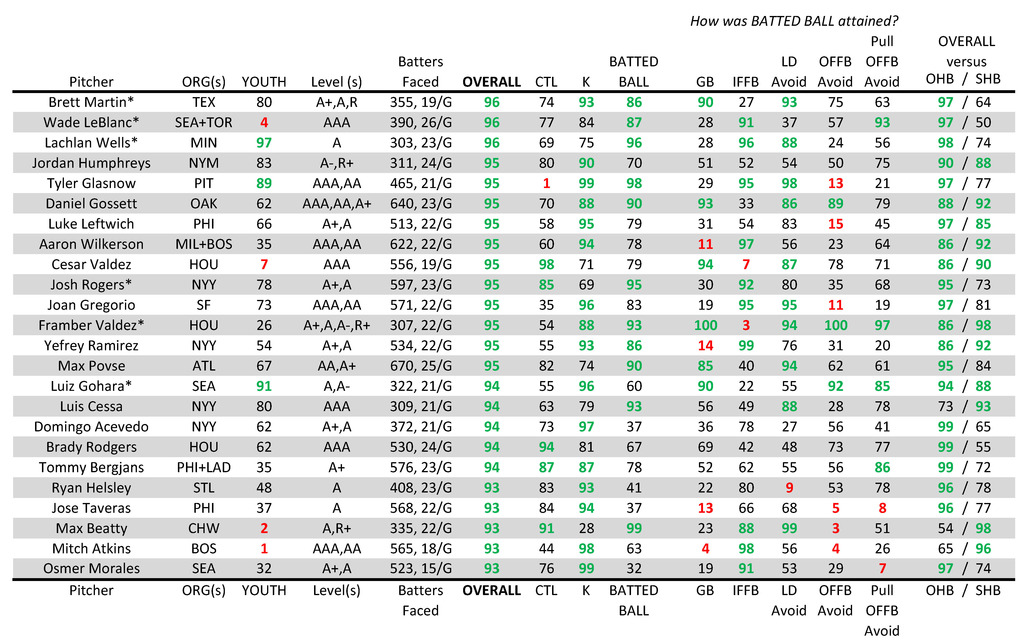 Numbers 49 through 72 below includes 2015 list returnees Michael Brady, Steven Brault, Alec Mills, Jordan Montgomery, and Anthony Banda. The reverse splits of Erick Fedde (88 Overall / 97 OHB / 59 SHB) are surprising from the standpoint that he has posted very forward-splits-skewed profiles dating back to his final NCAA season. 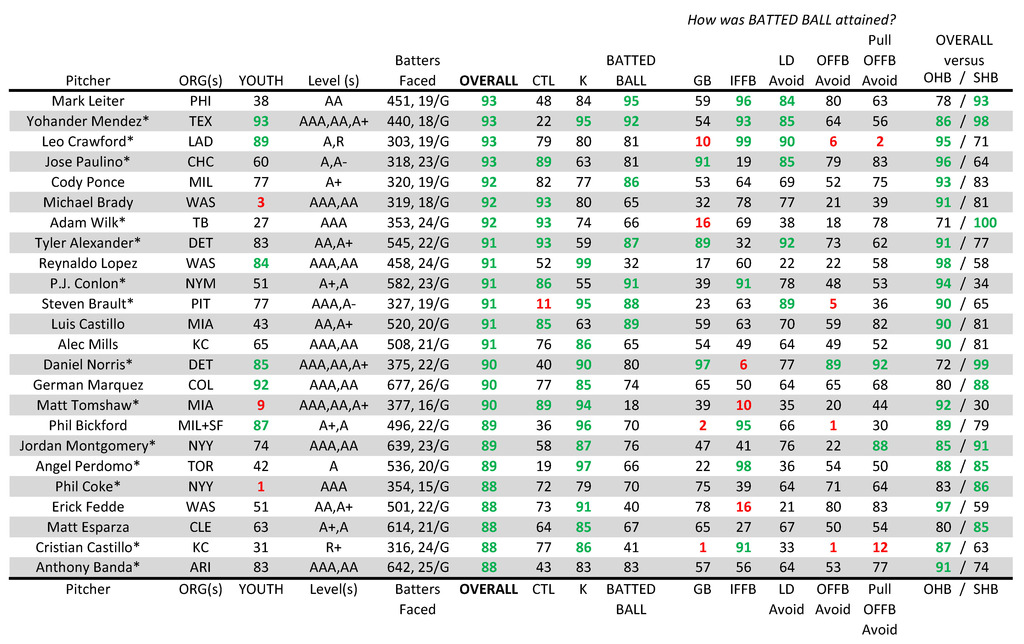 The final table of 73 through 95 includes 2015 list returnees Austin Gomber, Brent Honeywell (in spite of an awful loud 2016 batted ball profile), Matt Gage, and Amir Garrett (who just hung on to make the list after following up his first-half AA 95 Overall Rating with a 61 Overall Rating in AAA). Francis Martes barely snuck onto the bottom of the table after furiously rallying from a mere 42 Overall Rating that he had posted at the (end of June) Texas League All-Star break. 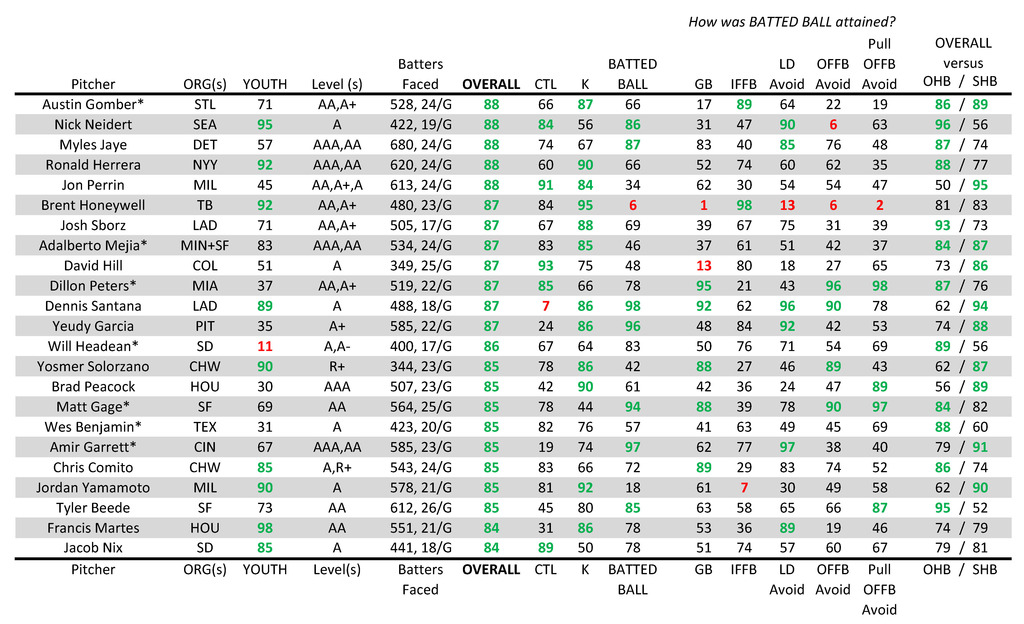 The 25 Who Were Also Plus or Better on Youth Rating

2015 prep draftee Triston McKenzie topped this table of very young (in a relative sense) elite performers over a half-season split roughly between short-season A and full-season A ball, while trailing only Martes and real-life Twins twin Lachlan Wells on Youth Rating. The no longer prospect-list-eligible but nonetheless infinitely intriguing Daniel Norris (90 Overall) assumed a newfound groundballing identity in AAA without enduring too much of a decline in K Rating. 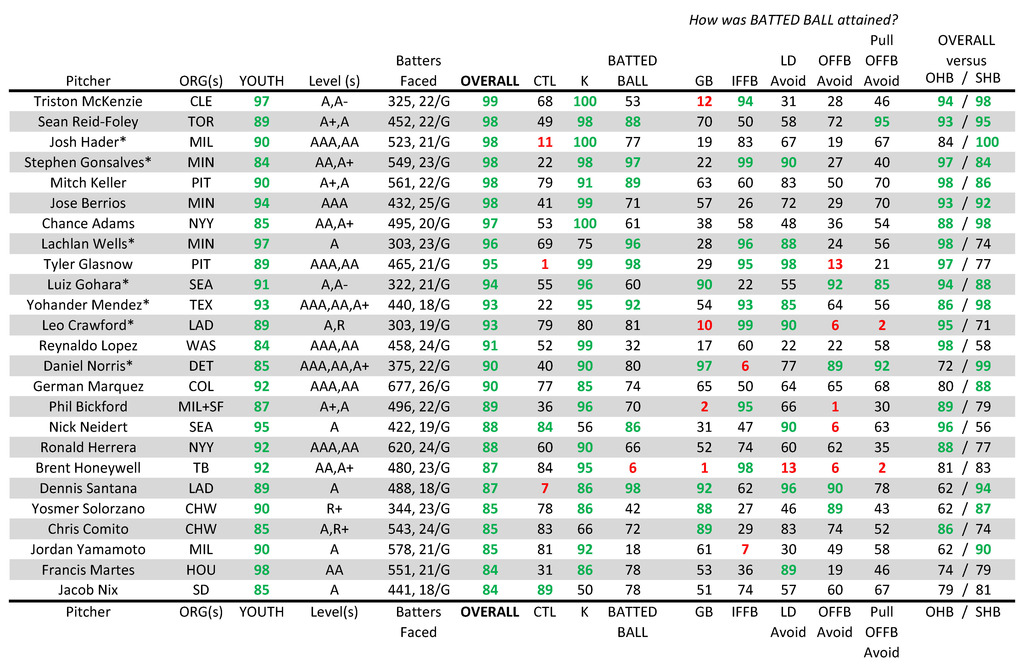 The Yankees led the way with a whopping 10 of the 95 SP. The Astros and Brewers each claimed 7, with the Brewers picking up Wilkerson and Bickford in late season deals. The Mariners are now minus 4 of their plus or better 2016 fivesome via a combo of 2 "DiPotos", 1 MiLB free agency departure, and 1 perhaps only temporary rule 5 draft loss. The Dodgers would likely have landed 7 on the list had they not dealt Cotton and Tommy Bergjans away during their postseason push.

The Orioles and Angels earned the ignominy of failing to land a single pitcher on the list.

Bonus Content: FaBIO Profiles of the Typical 2016 Full-Season MiLB SP of Each Organization

This exercise involves combining the FaBIO ratings of every full-season "starterish"-workload pitcher in the same organization to arrive at a typical SP profile for that organization's 2016 full-season affiliates. Beyond identifying organizational developmental biases, the results reflect some combination of how much SP talent the given organization has on hand at these levels and how well the organization elicits performance out of its SP talent. Each rating is again expressed on a percentile basis, with the 2016 rank among all 30 organizations at the relevant rating included in parentheses. At the far right of the table that shortly follows, one can spot and compare the 2015 Overall Rating (and Rank) for full-season SP of each organization.

The Yankees dominated at these performance metrics during 2016 full-season play, taking top honors at the K and finishing runner-up on batted ball profile thanks to a solid mix of GB, IFFB, LD avoidance, and late OFFB contact (to make future matters worse for fans of their AL East rivals, the Evil Empire also topped the relief version of this table and for the second year in a row). The Dodgers placed 2nd on Overall Rating with more of CTL/K-rooted approach. The Mariners sailed clear up from a 27th Overall Rating rank in 2015 to 3rd in 2016; while arrivals from the short-season leagues such as Gadea, Luiz Gohara, and Nick Neidert contributed to that fortuitous turnabout, improvements in pitcher development practices also stand to be involved. The Phillies made a large leap of their own up from 26th in 2015 to 6th in 2016, while also ranking 8th per Youth Rating. 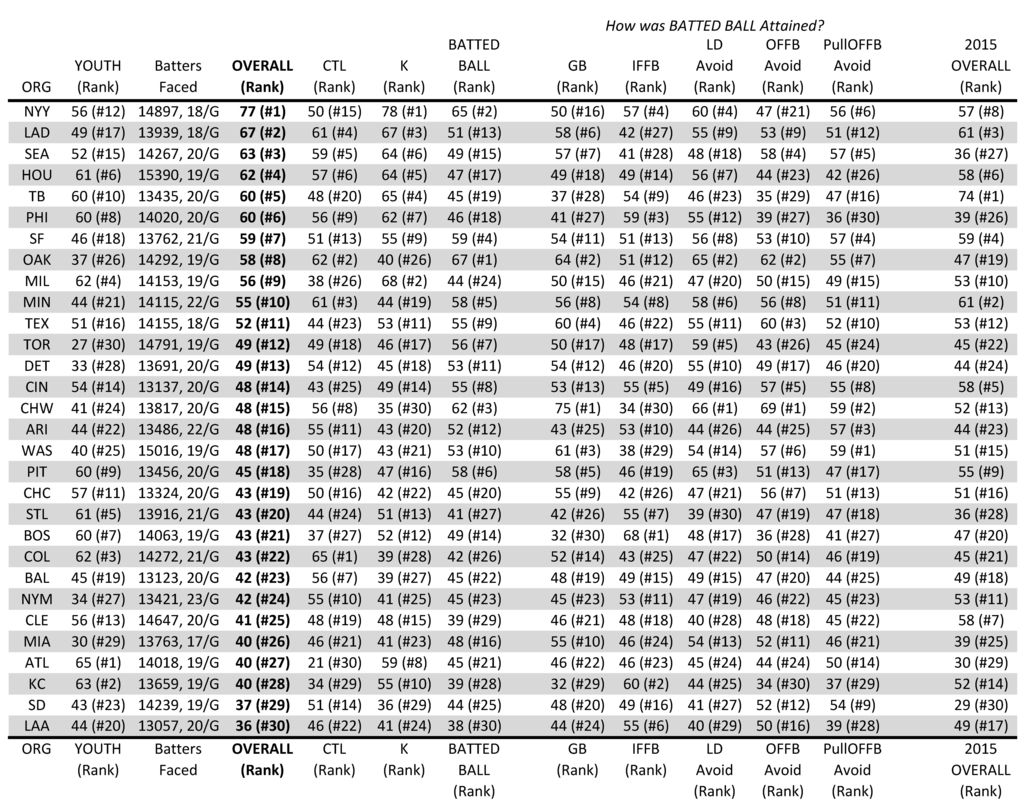 The most GB-biased organizations of 2016 would be the White Sox (75 GB Rating) and Athletics (64 GB Rating). Large fallers on Overall Rating from 2015 to 2016 include the Indians (7th to 25th), Mets (11th to 24th), Royals (14th to 28th), and Angels (17th to 30th). The Royals and Braves in particular appear to be overaggressively assigning/promoting their arms per the combination of Youth, Overall, CTL, K, and Batted Ball Ratings. Among the Overall Rating bottom feeders, the Braves and Padres likely deserve added scrutiny from this audience in so much as those organizations would now rank among the deepest in pitching talent per most prospecting sources yet numbers such as these suggest that developmental process changes are in order (to quote Yogi Berra: "You can observe a lot by just watching... how the organizations at the top of this table develop pitchers.").

The FaBIO overlords have narrowed the candidates down to this octet taking into consideration batters faced, Overall Rating, Youth Rating, professional experience, batted ball profiles, and so on.

Among these nominees, who earns your vote for 2016 FaBIO MiLB Starting Pitcher of the Year?