.
With the minorleagueball community top prospects voting now underway and venturing into "starting pitcher territory", let's take a look a back some of the 2015 minors' best performing starting pitchers with emphasis cast on their relative strengths and weaknesses.

The 106 pitchers listed a bit further down this page finished their 2015 minor league campaign at least a standard deviation above their league(s)'s average overall performance for a starting pitcher per my Fielding- and Ballpark-Independent Outcomes (FaBIO) statistical evaluation system, while facing at least 300 batters and averaging at least 15 batters faced per game (not many short-season players will qualify accordingly).

Each nonbunt, non-pitcher-batting plate appearance is sorted into 1 of the following 12 categories, and the pitcher is charged with the league's typical 2015 runs value for said event.

Each pitcher's final runs per plate appearance value is compared to the league peer group's mean and standard deviation for that parameter to obtain their Overall Rating. A Batted Ball Rating is determined similarly after omitting all BB+HBP or K events (individual components of the Batted Ball Rating are also computed such as GB Rating, IFFB Rating, etc., using GB per batted ball, IFFB per batted ball, ... to better understand how the Batted Ball Rating was attained and assess its sustainability). A Control (CTL) Rating (using BB+HBP per PA) and Strikeout (K) Rating (using K/PA) are also determined. A Youth Rating is determined by comparing the pitcher's age relative to the mean and standard deviation for SPs in their league.

Let's begin with the Top 25 placers on Overall Rating.

Blake Snell held off Jose De Leon for the top spot thanks to a better and likely more sustainable batted ball profile. Andy Ferguson (99 Overall) is a righthanded upper 80s 4-seamer and changeup tosser who saw his K Rating spike upward in AA and AAA to 99 from 50 in 2014; a very high LD Avoid Rating helped cover up his repertoire-related vulnerability to the pulled OFFB. Alex Reyes clearly killed it at the K at a beyond 100 level given how low his CTL and Batted Ball Ratings were. Lucas Giolito (99 Overall) and Steven Matz (98 Overall) were 2 of just 9 MiLB pitchers who rated in the green on both K Rating and GB Rating out of the 914 who faced at least 300 batters. 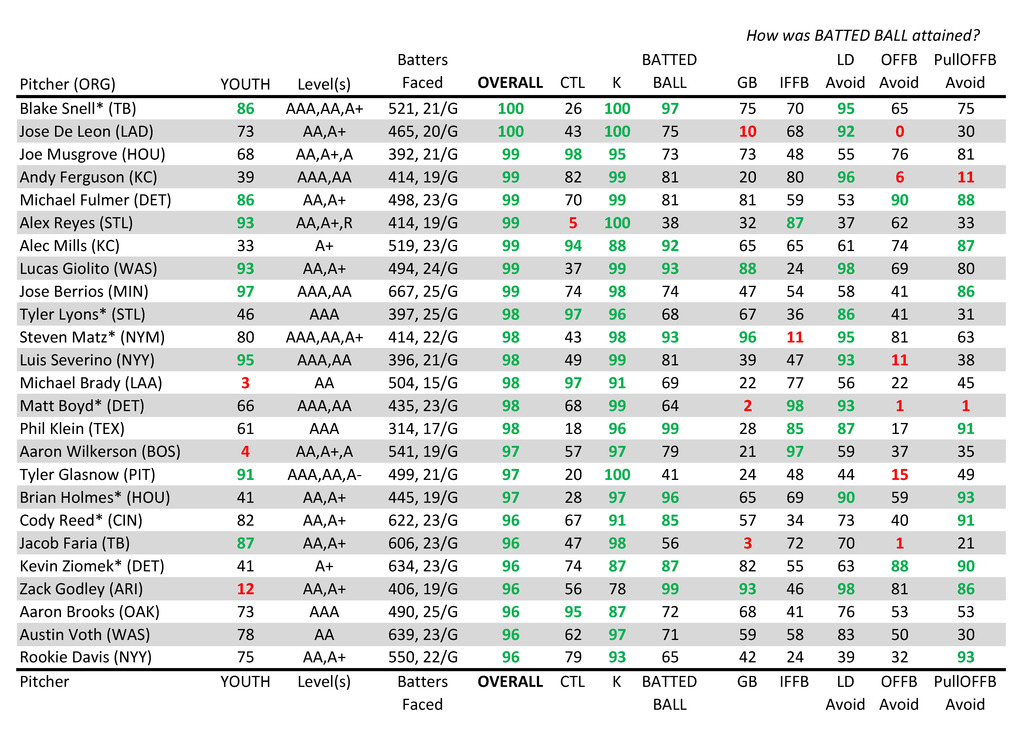 The extremely low Youth Ratings of Michael Brady (98 Overall) and Aaron Wilkerson (97 Overall) have logical explanations. Brady was an infielder at the University of California who the Marlins converted to a reliever in the offseason before his first full-season - 2015 was his first extended trial as a pro starter. Wilkerson underwent Tommy John surgery after a very successful NAIA career and did not debut in independent league ball until age 24. The 2015 of Zack Godley (96 Overall) has parallels to that of Brady with 2015 being his first opportunity to toe the rubber as a pro starter (Godley was a starting pitcher in college). Among the rest of the Top 25 one will note some very balanced all-around seasons (good or better at each of CTL, K, and Batted Ball) from the likes of Joe Musgrove, Michael Fulmer, Alec Mills (the only starter to rate in the green on all 3 parameters), Jose Berrios, Mississippi Cody Reed, Kevin Ziomek, and Aaron Brooks. 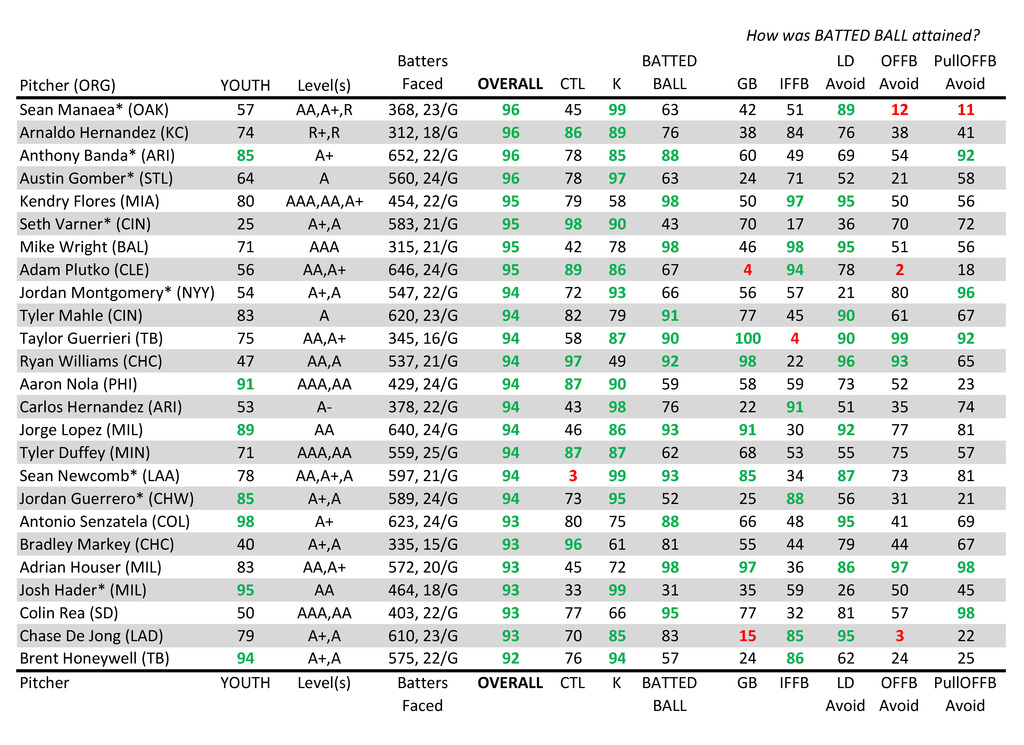 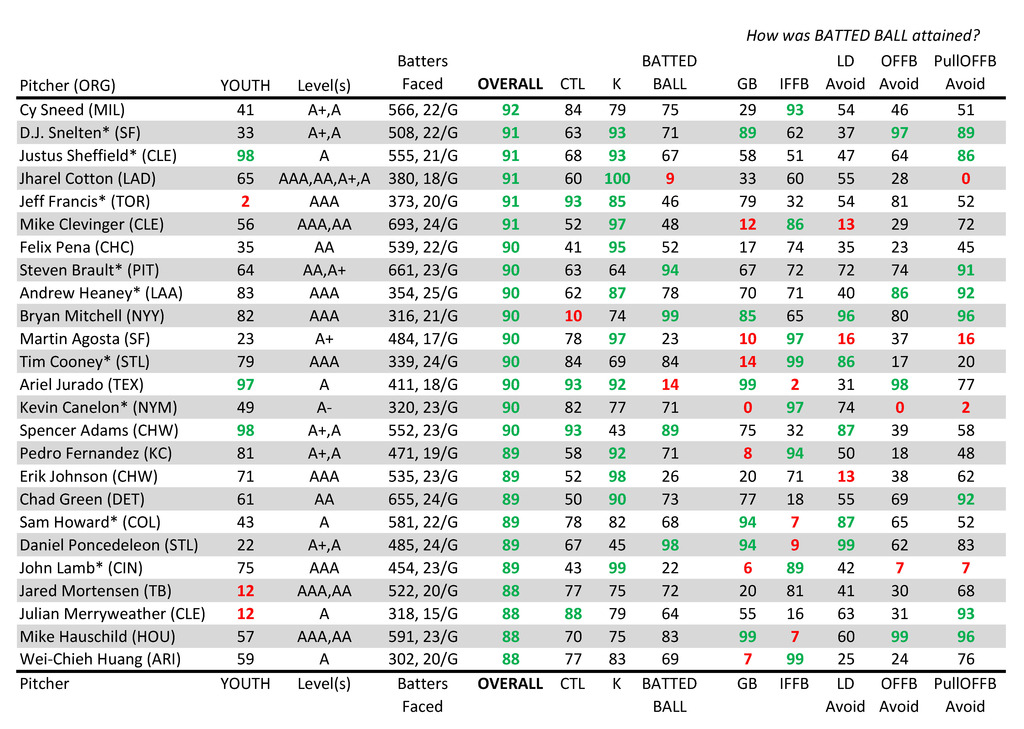 D.J. Snelten (92 Overall) and Ariel Jurado (90 Overall) were another 2 of the 9 MiLB pitchers who rated green at both K Rating and GB Rating; the rest of Jurado's batted ball profile was so loud that it dragged his Batted Ball Rating clear down to minus territory. John Lamb's (89 Overall) heavy OFFB bias and PullOFFB bias seems a dicey match for Great American Smallpark. 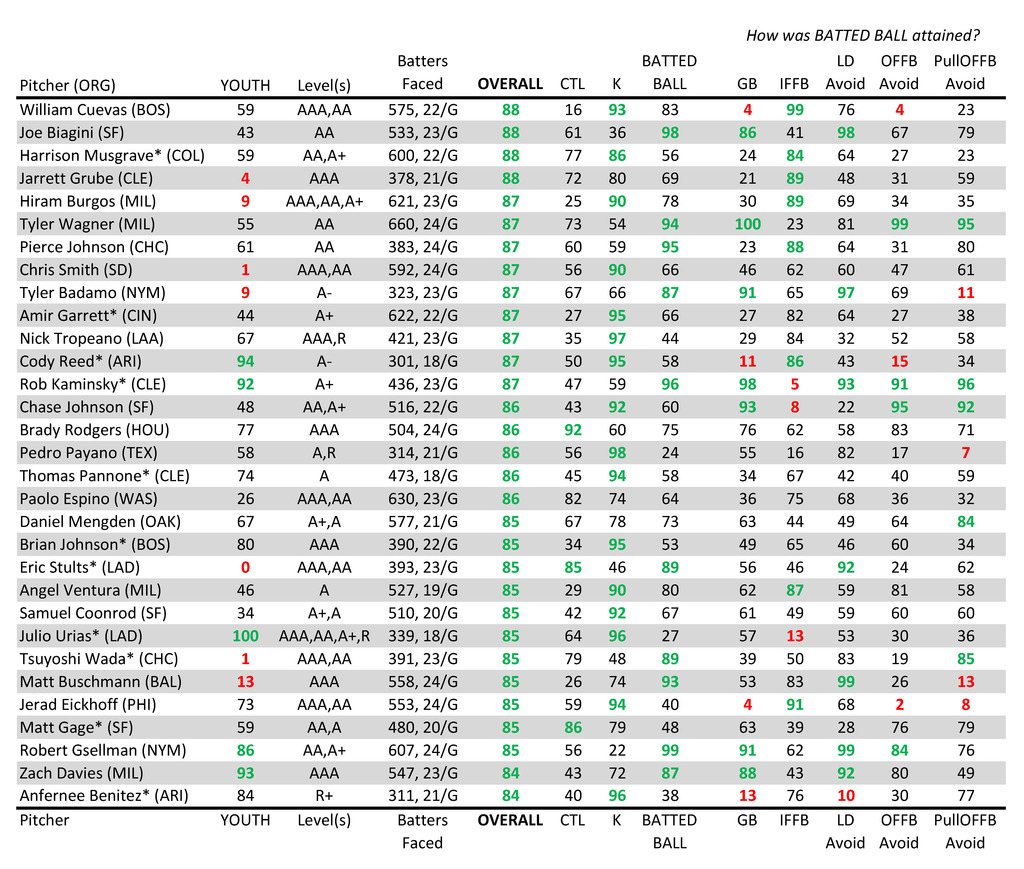 Chase Johnson (86 Overall) was another of the 9 MiLBers to rate plus at both K Rating and GB Rating. Alabama Cody Reed (87 Overall) joins his Mississippi namesake on the list of 106. One has to wonder how the loud OFFB profile of Jerad Eickhoff (85 Overall) will fit into Citizens Bank Ballpark's cozy dimensions over a larger sample.

Milwaukee led the way employing 8 of the 106 come the end of the 2015 campaign, followed closely by Cleveland with seven. Neither Atlanta nor Seattle could muster a single pitcher on the list, though the Braves traded for one during the offseason (Sean Newcomb).

Prospect Better Bets: Pitchers Among the 106 Who Were Also a Standard Deviation Younger Than League Average 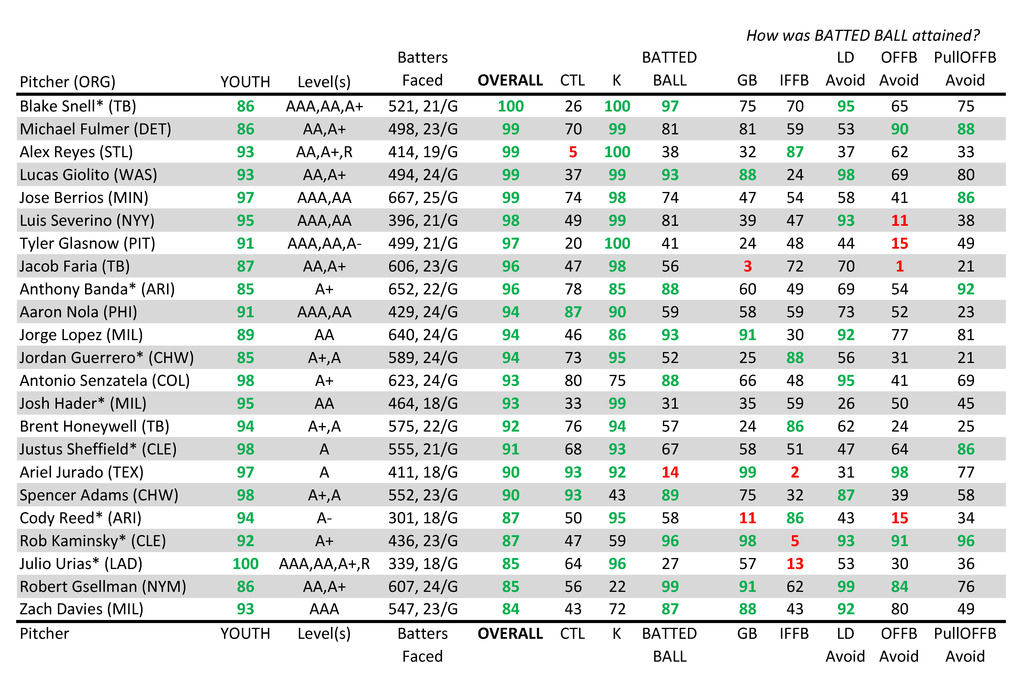 There were 23 such pitchers, with 2 organizations placing a trio on the list in the Rays (the very 3 pitchers you'd guess) and Brewers (thanks to 2 late season trades). The Tribe, Pale Hose, and Snakes landed a pair each. Robert Gsellman posted a unique line in which his plus overall performance stems almost entirely from an elite batted ball profile (he rates somewhat poorly on non-batted-ball events). Many an internet commenter has lamented Spencer Adams' lower than average K rates as a pro, with most of them being relatively unaware that Adams has been better than plus at the other facets of pitching while also rating plus on youth relative to league.

If you could have only one of the impressive top 7 "Plus on Overall Rating, Plus on Youth Rating" hurlers in your hypothetical organization, who would you choose?