Long after the tour was over and the video cameras were off, the players talked among themselves about the patients, mentioning them by name.

Those are the words that Brody, a 17-year-old patient at Children's Hospital & Medical Center in Omaha, Neb., spoke to the TCU Horned Frog baseball team on Wednesday morning. That sort of put their 15-inning, 3-2 loss to Virginia Tuesday night in the College World Series into perspective.

Brody is a high school pitcher from Waverly, Neb. He came off the mound after tossing a complete game and something didn't feel right. He went to the trainer and she found a lump on his neck.

A group of Horned Frogs that included Kyle Bacak, Dylan Fitzgerald, Alex Young, Trey Teakell and Jeremie Fagnan listened intently as Brody told them his story. They asked him questions, signed a ball and a poster and posed for a picture with him.

The team broke into many such groups and began making their rounds.

For Bacak, the team's catcher, this will be his final opportunity to make such a visit with TCU. He's a senior and was drafted in the 25th round by the Washington Nationals, so he'll be bound for rookie ball soon. But on Wednesday morning he wasn't thinking about that or the tough loss from the night before.

"Really, even though we lost, we haven't lost anything," he told me. "When you come here and see these kids battling for their lives - they're the ones who are battling. We're just having fun playing baseball. It is great though to be able to come here and spend time with these kids and just try to put smiles on their faces."

That's exactly what they did.

They visited Markeva, a 14-year-old patient who was bashful at first. But when they handed her an autographed baseball, she smiled. A friend or relative noted that smile to the players.

As they poked their heads in to see Madeline, a two-year-old who was sitting in bed next to her mother, they noted two signs on her door announcing that she was in her last chemo. The players had a hard time getting her attention because she was in the middle of a SpongeBob episode, prompting one of the players to say, "I remember this episode!" 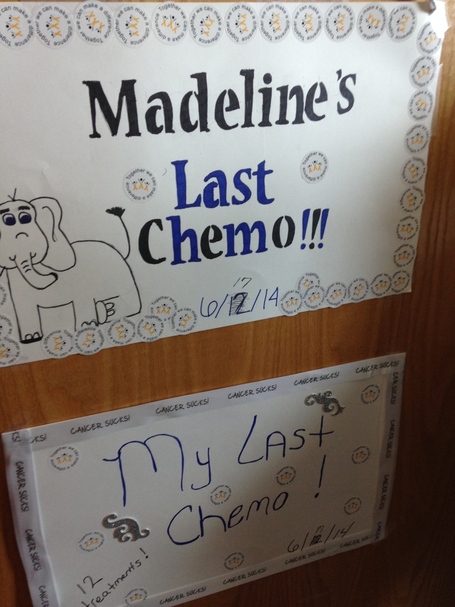 While visiting a 15-year-old girl, her mother told the team they kept her husband up way too late on Tuesday night. But then, in all seriousness, she pulled them aside to give them some news about her daughter.

"She looked really rough this morning until she heard you guys were coming in," she said. "Then she perked right up."

In that moment, the givers became the givees.

As the tour continued, nurses chatted with the team, offering condolences over the loss but then asking how their stay in Omaha was going.

A few minutes later, the group was talking to a seven-year-old boy who admitted that his favorite sport was soccer, not baseball, and that led to a World Cup conversation with the Horned Frogs.

Long after the tour was over and the video cameras were off, the players talked among themselves about the patients, mentioning them by name.

Several such patients came to Bacak's mind when I talked to him afterward, including Brody and Madeline. He also mentioned a boy whose parents just found out a week ago that he has cancer. The boy had just come out of surgery and his father was holding him.

"They asked us to pray for them," Bacak said. "That was really moving."