The 2012 Baseball Prospect Book: Get Your Orders In!

Share All sharing options for: The 2012 Baseball Prospect Book: Get Your Orders In! 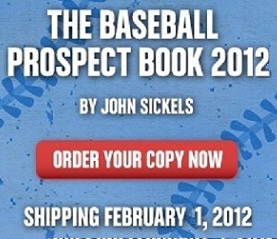 You still have a window of opportunity to order your paperback copy of the 2012 Baseball Prospect Book. If all goes according to plan, we will start shipping the book next weekend. We will likely run out of paper copies very quickly so it is first come, first serve. We are also selling the .pdf version this year, so when we run out of hard copies you can still get the book in electronic format, although I know many of you prefer paper.

The book has prospect reports on 1205 players. Below the fold, you can find a few sample comments from the book.

The actual comments in the book include statistics for the player going back two years (sometimes three). When possible, I have included statistics from college and junior college.

Keyvius Sampson’s 2010 season was marred by a labrum tear and a sore elbow,
although he was very effective when he did pitch. 2011 was even better: he was
healthy all year and was consistently successful in the Low-A Midwest League,
posting strong component ratios in all categories. Aside from a couple of bad starts
in June that resulted in a 9.00 ERA that month, he looked great all year. Sampson has
a 90-95 MPH fastball with excellent movement, yet he locates it well. His changeup
is very impressive, but he’s still refining his curveball, a soft pitch that draws mixed
reviews. Highly-athletic, he showed no signs of the arm problems that dogged him in
’10 and I don’t think his injury risk is any higher than other pitchers his age.
He has a few issues to iron out, but I like him a lot. Grade B+.

Alex Santana was drafted by the Dodgers in the second round last year, out of high
school in Cape Coral, Florida. The son of former major leaguer Rafael Santana, Alex
looks like a prototype third baseman physically, with raw power and a strong
throwing arm, but is a long way off with his baseball skills. He had problems with
his swing in rookie ball, struck out too much, didn’t draw walks, showed an
immature approach at the plate, and was a butcher defensively, committing 17 errors
in 38 defensive games. He didn’t turn 18 until August, so he was one of the youngest
players in the draft class, giving him a better chance to develop than you might
expect from his early numbers. Grade C.

A sixth round pick in 2008 from the University of California, Josh Satin hits .300
everywhere he goes, with a decent walk rate, plenty of doubles, and a few homers.
He’s never rated as a top prospect because he was old when drafted and is now 27,
plus he doesn’t have great tools. The Mets have been grooming him as a utility guy.
He doesn’t have enough range for shortstop and doesn’t run well enough for the
outfield, and even at the other infield positions, his range is limited. However, he
doesn’t make a ton of errors, and the versatility is nice even if he doesn’t wow
anyone with his mobility. Satin fanned 11 times in 25 major league at-bats, but given
some adjustment time I think he could hit .270-.280 with enough doubles and walks
to be useful as a bench player. Numerous players with worse skill sets have had long
careers, but he’ll need to get hot and impress the right people at the right time to
avoid exile in Triple-A. Grade C.

The son of Kevin Seitzer, Cameron was drafted in the 11th round from the University
of Oklahoma last June. He was considered to be a possible third round pick before
the college season began, but the switch to the less-potent metal bats in the NCAA
seemed to rob him of home run power, which seriously dropped his draft stock.
Scouts like his swing and the feel he shows for the strike zone, but without more
distance power, he didn’t project well as a first baseman. Interestingly, the homers
came back in the Appalachian League, helping him post a solid +23 percent OPS,
but scouts aren’t convinced the power will hold up against better pitching. I saw a lot
of him in college and I always liked the way he worked counts and controlled the
zone, but it makes sense to be cautious until we see him at higher levels. Grade C.