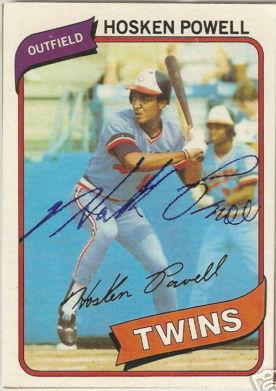 **Hosken Who? Hosken Powell was drafted by the Twins in the first round of the June secondary phase of the 1975 draft, out of Chipola JC in Florida. He was considered a pure hitter with some speed and power potential, and hit great in rookie ball, at .329 with a .506 SLG in 64 games for Elizabethton in the Appy League. Promoted to Reno in the Cal League in 1976, he hit .345 with a .471 SLG in 126 games. At this point the Twins started hyping him as a hitter in the mold of Rod Carew.

**Ben Revere, hitting .308/.377/.350 in the Florida State League with 15 steals. . .he's got to show more power than that for the Kenny Lofton comparisons to hold. He's not Hosken Powell. . .but what if he is more Juan Pierre, or God forbid, Joey Gathright? Despite the lesson of Hosken Powell, I still find it easy to be seduced by a pretty batting average at times.

**I wish the Twins would get Aaron Hicks up to Beloit so I could compare him with Brett Lawrie and see if I made the right Shadow Draft pick last year. Lawrie is hitting .298/.350/.538 for Wisconsin. I selected him over Hicks with the idea that Lawrie could play the outfield. I really don't know if I like the Brewers' decision to play him at second base or not; it could hamper the bat. He has a .944 fielding percentage thus far, which isn't horrible considering his lack of experience at the position. We'll have to see if he shows the range once we have a larger sample size.

**Is it time to worry about Pedro Alvarez yet? He's hitting .214/.328/.417 at Lynchburg, and has made 10 errors in 28 games at third base. He's fanned 32 times in 29 games, but on the other hand has drawn 19 walks. The sample is still small. . .but geez, he hasn't really played that well for over a year now. Remember his junior year at Vandy wasn't what people expected either, though a wrist injury was the reason given. I'm gonna give him more time before pushing the panic button, but it makes you wonder.

**I've been on-record as being skeptical about Andrew Brackman in the Yankees system, believing that the hype about him had a good chance not to match the reality. So far he is 0-4, 4.55 with a 29/14 K/BB ratio in 30 innings for Low-A Charleston, with 30 hits allowed. His components aren't awful, and he has a 2.12 GO/AO ratio, but his command still needs work. In short, the jury is still out. People want Delphic pronouncements, but the sample sizes are still small, especially with pitchers, and "don't know yet" is still the honest answer with guys like this.

**I'm going to set up the ground rules for the 2009 Minor League Ball Mock Draft on Wednesday. The main change this year is that we are going to just go through the end of the third round. Going five rounds as in past years was just too much. The Mock Draft will be either June 6th or June 7th; I'll decide by Wednesday. You are welcome to suggest a preference.