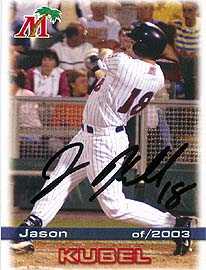 Jason Kubel was drafted by the Minnesota Twins in the 12th round in 2000, out of high school in . His bat was well-respected and he could have gone as high as the fourth round, but he had a scholarship and his signability was unclear when drafted. He performed well in rookie ball, hitting .282/.367/.372 in 23 games, not showing much power but demonstrating good plate discipline. I didn’t write much about short-season players back then, but a similar guy now would likely get a “Grade C with higher potential” rating, pending more data.

Kubel returned to the Gulf Coast Rookie League in 2001 and took a step forward, hitting .331/.422/.500 in 37 games, showing more pop along with very good plate discipline: 19 walks against 14 strikeouts in 124 at-bats. Of course, he was repeating the league at age 19. “Grade C with higher potential” would remain the rating at this point.

The Twins moved Kubel up to the full-season Midwest League in 2002 and he responded with an excellent season, hitting .321/.380/.521 for Quad Cities, with 41 walks and just 48 strikeouts in 424 at-bats, along with a +30 percent OPS. I gave him a Grade B in the 2003 book, noting that a lack of speed and questionable defense (aside from a good arm) were issues, but that the bat looked excellent. I saw him play that year and was extremely impressed; he had a very quick bat, and a very advanced approach, making contact on just about everything but not swinging at bad pitches very often.

Kubel turns 27 in May, and seems like a good candidate for a classic “age 27” peak season, at least if he can solve the lefty problem. The new two-year (plus option) contract he signed last month has drawn some controversy, but I can understand it. If he does break out, the Twins get his services for $2.75 million in ’09 and $4.1 million in ’10, which are reasonable figures at today’s prices. If the breakout doesn’t occur, or if he gets worse, they can decline the $5.1 million option in 2011. This isn’t a deal that will bust the budget, and there is a reasonable chance it could be quite cost effective.

As a prospect, Kubel performed well at every level and demonstrated a notably low strikeout rate for a young hitter with power. Would he be a genuine star if not for the knee injury? Perhaps. . .perhaps not. It’s important to remember that he is still quite young, and if he can boost his production against lefties, he can be far more than just a good platoon bat.

Interesting mix of early fadeouts with long-term successes there. I don't like the Hammonds, Alou, and Sievers comps since they were right-handed hitters. Gibson was a lot more athletic than Kubel when he was younger. I can see O'Neill, Wilkerson, Giambi, and Tucker as possible outcomes along the spectrum of good and bad.