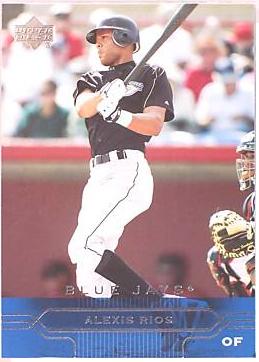 Alexis Rios was drafted by the Toronto Blue Jays in the first round in 1999, out of , . This was a budget pick: most teams thought Rios was a second or third rounder, but the Jays picked him 19th overall and gave him a $845,000 bonus, the smallest bonus in the first round. Scouts liked his athleticism and tools, but he was considered raw and a five-year development project. He hit .269/.321/.325 in the Pioneer League, not great but really not that bad considering his level of experience, and I gave him a Grade C+ in the 2000 book.

Rios split 2000 between in the Sally League (.230/.236/.297 in 22 games) and in the New York-Penn League (.267/.314/.345 in 50 games). He hit just one homer all season, had problems controlling the strike zone, and in general was just very raw. One positive sign was a reasonably low strikeout rate. . .he didn’t draw many walks, but at least he was making some contact. But the power was quite weak, and scouts reported that he had a lot of work to do with his swing. I gave him a Grade C in the 2001 book, noting that he was still young enough to improve but that quick progress shouldn’t be expected.

Rios spent all of 2001 with in the Sally League, hitting .263/.296/.354 with 22 steals but just two homers. I gave him another Grade C, noting the lack of power, but also noting his low strikeout rate (59 in 480 at-bats). I wrote that while the lack of power production and low walk rate was troublesome, the fact that he did make contact indicated he at least had a chance to learn the strike zone. . .he wasn’t a swing-and-miss guy. There was a chance he could still develop given his tools and youth. Still a Grade C.

The Jays moved him up to in 2002. He hit .305/.344/.408, showing a 100 point increase in OPS at a higher level. He still hit just three homers, and skeptics could say it was just better luck on balls in play leading to a higher average, but scouts did seem to think he made real progress refining his swing. I kept him at Grade C in the 2003 book, noting that the Blue Jays regime was now talking about the importance of strike zone judgment, and that it would be interesting to see how Rios would respond.

Rios moved up to Double-A in 2003 and had an excellent season, hitting .352/.402/.521, setting career highs in everything except steals. He hit 32 doubles, 11 triples, 11 homers, and as I wrote in the 2004 book, he “made me look like an idiot by battering Eastern League pitching.” I wrote that a lot of his value was tied up in his batting average, and that “if he’s hitting .300, that’s fine, but if he drops down to .260, it will be a problem. Rios has been over .300 for two years now, and it’s looking less like a fluke and more like real progress. His power is coming around, and while his walk rate isn’t great, scouts say he’s made progress reading the strike zone.”  I also noted his improved defensive skills and strong arm, and gave him a Grade B+.

Comparable players to Rios according to Sim Score:

Even the worst of these guys was useful.

Rios is a case study of a raw player with tools who turned them into skills. In his case, even when he was struggling in the low minors, the fact that he kept his strikeout rate under control was a positive marker. He needed help with the zone and with getting his swing in gear, but he wasn’t flailing wildly and piling up the whiffs. If you’re looking at raw tools guys, and trying to figure out which ones could make it, look for the guys with the low strikeout rates, even if they aren’t drawing walks yet.