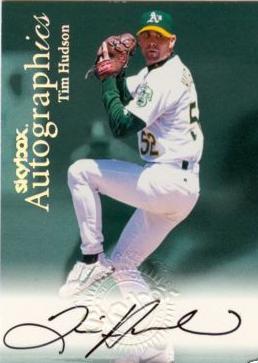 Tim Hudson was drafted by in the sixth round in 1997, out of . He was very successful in college, going 15-2, 2.97 with a 165/50 K/BB in 118 innings in ’07. Scouts liked his approach to pitching, but lack of plus velocity kept him out of the first five rounds. He pitched well in his pro debut, going 3-1, 2.51 with a 37/15 K/BB in 29 innings for in the Northwest League. I didn’t grade many short-season players then, but nowadays a guy with this profile (average velocity, good secondary stuff, good college and short-season success) would get a Grade C+.

began 1998 with in the California League, going 4-0, 1.67 with a 48/18 K/BB in 39 innings. Promoted to Double-A Huntsville, he found the going a bit more difficult. He went 10-9, but with a 4.54 ERA and a 104/71 K/BB in 135 innings with 136 hits allowed. Scouts were very impressed with his splitter, but his command wobbled, shown by the high walk rate and 13 wild pitches. Scouts his tenacity, but his fastball excited no one, he walked too many guys, and wasn’t rated among the best prospects in the Southern League by Baseball . I gave him a Grade C in the 1999 book, noting that he had decent stuff, but that the command issue would prevent success unless he solved it. I also wrote that he would probably do better as a reliever than as a starter.

Aside from a rough 2006 season, the only year his ERA+ was worse than league average, he’s been remarkably consistent, now holding a career record of 146-77, 3.48 with a 1372/619 K/BB in 2017 innings. His Similar Pitchers list is solid: Andy Pettitte, Bartolo Colon, Dennis Leonard, Mike Mussina, Ramon Martinez, Jim Bunning, Jack McDowell, Don Newcombe, John Candelaria, Dizzy Dean. . .all very effective pitchers, though some of them burned out in their early 30s.

As a prospect, had just one full season and two partial seasons in the minors. His A-ball numbers were very good, and his limited Triple-A exposure went well, but his Double-A performance in ’98 wasn’t very impressive, with mediocre K/BB and K/IP marks and so-so scouting reports that resulted in a Grade C rating. If you look at the totality of his career, college, minors, and majors, it was the Double-A performance which was the aberration. This is a good example of how unpredictable pitchers can be.