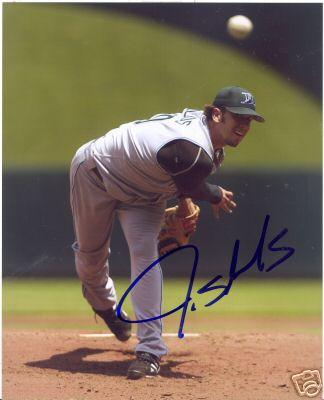 James Shields was drafted by the Rays in the 16th round in 2000, out of high school in Newhall, California. He signed late and didn't make his pro debut until 2001, but it was quite successful: 2.65 ERA with a 60/10 K/BB in 71 innings for Charleston in the Sally League. I did not put him in the 2002 book, but I should have, as in retrospect his numbers were very good and the scouting reports indicated a pitcher with a lot of polish for his age.. I'd rate a similar guy now as a Grade C+/B- type.

Shoulder trouble cost Shields the entire 2002 season, and he entered 2003 with a lot of question marks about his future. He ended up going 10-10, 4.45 with a 119/38 K/BB in 144 innings for Bakersfield in the Cal League in 2003, with 161 hits allowed. He would rate as a Grade C prospect, throwing strikes, but very hittable. Scouting reports dating to that period indicated that the shoulder injury had cost him velocity and his status was pretty marginal.

Shields returned to Bakersfield in 2004, going 8-5, 4.23 with a 92/33 K/BB in 117 innings, 119 hits allowed. Again, he was throwing strikes, but wasn't dominant. The good news was that his velocity was starting to pick up again, though it still wasn't terrific. Grade C/C+ would seem reasonable, though needing to prove himself at higher levels of course.

2005 saw Shields at Double-A Montgomery, posting a 2.80 ERA with a 104/31 K/BB in 109 innings with 95 hits allowed. He looked very good in the Arizona Fall League as well. I gave him a Grade B- in the 2006 book, issuing a "Sleeper Alert!" and pointing out his strong command of his 90 MPH fastball, curveball, and changeup, advising readers to keep a close eye on him.

Shields split 2006 between Triple-A and the majors, and as you know he's been very good-to-excellent for the Rays in 2007 and 2008. Shields has a great feel for pitching, mixing his fastball, cutter, changeup, and curveball very effectively. His strikeout rate declined this year, but otherwise he's been very consistent the last two seasons. In the minors he showed excellent K/BB ratios, but durability concerns were his main problem. That hasn't been an issue the last three seasons, and if he remains healthy he should be effective at his current level for several more years.