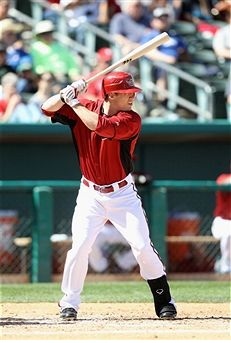 **Arizona Diamondbacks prospect Collin Cowgill hit for the cycle last night, going 5-for-6 with four RBI and a stolen base for Triple-A Reno. On the season, he's hitting .366/.429/.612 with 11 homers, 18 steals in 20 attempts, and a 25/32 BB/K ratio in 227 at-bats. Cowgill was a fifth round pick in 2008 from the University of Kentucky. He's got good tools, including an outstanding throwing arm, above average speed, decent power, and reasonable plate discipline. He doesn't show up on a lot of prospect lists because he's just 5-9, and scouts automatically have some skepticism as a result, especially since as a right-handed hitter he doesn't profile as an ideal fourth outfielder. But he's always performed well and is knocking on the door of the Show.

**Colorado Rockies prospect Edwar Cabrera is currently leading the minor leagues with 96 strikeouts, with an overall 4-1, 3.30 ERA, 96/14 K/BB in 71 innings for Low-A Asheville in the Sally League, with 60 hits allowed. A 6-0, 185 pound, 23-year-old lefty, Cabrera works with a 90-92 MPH fastball and a mediocre breaking ball. The strikeouts come because he has an outstanding changeup, one of the best in the minor leagues. Cabrera is old for Low-A and given his current performance a promotion to High-A for the second half seems wise. I don't think he has much left to learn against younger hitters in the Sally League.

**Former major league pitcher Adam Loewen is rebuilding his career as an outfield prospect, currently hitting .325/.390/.597 for Triple-A Las Vegas in the Blue Jays system, with 22 doubles, 10 homers, 23 walks, and 59 strikeouts in 206 at-bats. Yes, this is Las Vegas and the PCL, although his home/road splits aren't especially extreme (1.011 OPS at home, .958 on the road) given the environment. He's been especially hot of late, hitting .432 with three homers in his last 10 games. My thinking here is that Loewen's power is mostly real, but that he would be hard-pressed to replicate this sort of batting average against major league pitching. He strikes out too much and I don't think his plate discipline will hold up well. He is also a shaky outfield defender. But still, he might be able to contribute as a platoon bat/DH type, and even if he settles in as a Quadruple-A slugger, that's better than being a retired pitcher.

**One of my favorite sleeper prospects the last couple of years has been New York Yankees right-hander David Phelps, currently 4-4, 3.25, with a 58/17 K/BB in 69 innings for Triple-A Scranton, with 71 hits allowed. He's always been overshadowed by sexier prospects in the system, but he just keeps plugging along, moving up the ladder, throwing strikes and performing well. He has a 90-93 MPH fastball, sometimes a tick higher, and mixes it with a curve, slider, and changeup, all of which have improved steadily. He was a 14th round pick in 2008 out of Notre Dame. He's not spectacular but he gets the job done, and while it would be an upset for him to earn a major role in the Bronx, he should see the majors eventually and would  make a fine trade asset. He could be a good fifth starter or long reliever.