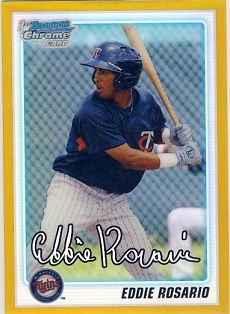 **One of my favorite sleeper prospects in the 2010 draft was Eddie Rosario, drafted by the Minnesota Twins in the fourth round out of high school in Guayama, Puerto Rico. Pre-draft scouting reports said that his tools were average, but that his approach was polished and he reminded scouts of Bobby Abreu. Bobby Abreu is one of my favorite players, so I figured I should pay attention to Rosario. You should too. He had a fine debut in the Gulf Coast League last summer, hitting .294/.343/.438 with 22 steals in 27 attempts, five homers, 16 walks, and just 28 strikeouts in 194 at-bats. His raw power, speed and arm strength were better than advertised pre-draft, he showed excellent instincts, and convinced the Twins that he can handle center field.

Rosario opened 2011 with rookie-level Elizabethton last week and is off to a fast start, 12-for-32 (.375) with two doubles, a triple-, two homers, three walks, and two steals. A negative is 12 strikeouts, so we'll have to watch that, but overall there is more to be pleased about than concerned with. He's also playing well in center field and has already picked up two assists with a great range factor. Granted, a seven-game sample is far too small to draw conclusions, but it does fit into reports that he can handle the position. Overall, in his first 58 professional games he's hit .305/.355/.473 with 24 steals in 29 attempts.

**Mixed results for St. Louis Cardinals prospect Tyrell Jenkins in his first two starts for Johnson City in the Appalachian League. He went five innings on June 21st, allowing five hits, one walks, and two runs, fanning five. In his second start last night he went 4.1 innings, allowing six hits, five runs, two homers, walking one and fanning five. Overall he's allowed 11 hits and seven runs in his first 9.1 innings of work, which given the sample involved doesn't mean much, but I do like the 10/2 K/BB ratio, and at this point in his career that's the main thing I'm watching statistically. Drafted in the supplemental first round last year out of high school in Henderson, Texas, Jenkins is an extraordinary athlete, throws hard, and has the potential for three plus pitches with his fastball, curveball, and changeup. He has huge upside and if the K/BB and K/IP remain strong, the rest should follow eventually.

**A sleeper from the 2011 draft to watch closely is right-hander Manny Rodriguez, drafted by the Washington Nationals in the 10th round out of Barry University in Florida. He's already 22 but is a converted third baseman who just started pitching last year, so he has a fresh arm and more upside than most pitchers his age. In his first six innings for Auburn in the New York-Penn League, he's allowed zero runs, two walks, and just one hit, while fanning seven. He posted a 2.00 ERA with a 126/35 K/BB in 113 innings and just 87 hits allowed during the college season. Barry is a Division II school but plays good competition, and Rodriguez's stuff is legitimate, including a 90-94 MPH fastball and a curveball and changeup that are solid considering his lack of experience. He's definitely interesting.

**Former Florida State star Mike McGee went 5-for-9 with three triples in his first two professional games for the Arizona League Mariners, and he was just bumped up to the Low-A Clinton roster, a more appropriate level of competition. Drafted in the 15th round this year, McGee has always impressed scouts with his drive, determination, and ability to play well under pressure, but his physical tools are average to below average.

The Mariners will try him as an outfielder and I suspect he'll do well in A-ball, but if he can't hit in the high minors he could always return to pitching. At age 23 he'll need to move quickly as a position player, but I would not underestimate him.