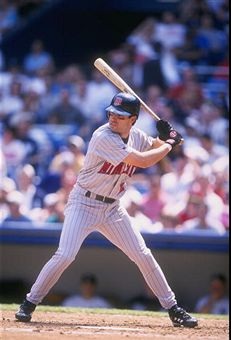 Todd Walker has come up a few times in conversation over the last couple of weeks, as a possible comp for Dustin Ackley and Jason Kipnis. Walker was a very interesting prospect in his time and is a great topic for a Career Profile.

Todd Walker was a superstar at Louisiana State University. As a sophomore in 1993, he hit .395 with 22 homers and 102 RBI, and was named Most Outstanding Player at the College World Series, leading the Tigers to victory over Wichita State with a homer in the championship game.

Considered the best pure hitter available in the 1994 draft, he was selected eighth-overall by the Minnesota Twins. Although his defense was considered just mediocre at second base, he was projected as a guy who could win batting championships with at least moderate power. He hit .304/.406/.532 in 46 games for High-A Fort Myers after signing, which didn't do anything to hurt his reputation. Eddie Epstein didn't give out letter grades to draftees in the 1995 Minor League Scouting Notebook, but he wrote that Walker was "an outstanding prospect," an assessment I totally agreed with. I would likely have given him a Grade A-, with only the doubts about his glove preventing a straight A.

Assigned to Double-A New Britain for 1995, Walker hit .290/.365/.478 with 27 doubles, 21 homers, 23 steals, 63 walks, and 101 strikeouts in 513 at-bats, making the league All-Star team and earning Baseball America's ranking as the number seven prospect in the league. Reviews of his bat were quite good: he had done everything anticipated offensively. Again, the question was defense. His range was OK, but scouts didn't like his hands or his lack of quickness on the double play. There was a lot of talk about making him a third baseman, though his arm was considered short for the position. I gave him a Grade A- in the 1996 book, certain that the bat would be strong.and ranking him as the Number 10 hitting prospect.

Moved up to Triple-A Salt Lake for 1996, Walker raked in the friendly PCL, hitting .339/.400/.599 with 41 doubles, 28 homers, 111 RBI, 57 walks, and 91 strikeouts in 551 at-bats. He hit .256/.281/.329 in a 25-game trial with the Twins. Shifting over to third base, he showed good range (according to my very old scouting notes from a game I saw back then) but his arm wasn't very good and he made mistakes of inexperience. Still, if he hit, the glove would be OK. I heard excellent things about his personality and work ethic from PCL sources. I gave him another Grade A- in the '97 book, ranking him Number Eight on my hitting prospect list.

Walker opened 1997 as the Twins' third baseman and was a favorite for Rookie of the Year. He got off to a very slow start, struggling in April and May. Twins manager Tom Kelly publically criticized Walker for his defense and was disappointing in his hitting, then sent him back to Triple-A in June. Walker got angry about this and publically said that Kelly had given up on him too quickly, which, frankly, a lot of people agreed with, although it was unwise of him to say so openly. Walker destroyed PCL pitching, hitting .345/.420/.516 in 83 games, then returned to Minnesota in September and hit .364 with a .591 SLG down the stretch. His final season line was .237/.288/.353.

Walker opened 1998 as the second baseman, replacing the traded Chuck Knoblauch. Walker led the American League in hitting much of the summer before a late slump, but finished with strong numbers at .316/.371/.473 with 41 doubles, 12 homers, 19 steals, 47 walks, and just 65 strikeouts in 528 at-bats. Kelly continued to criticize Walker's glove, although his fielding percentage and range factors were all about league average, but hitting like that, it was impossible to keep him out of the lineup. He definitely had the look of a future batting champion.

1999 didn't go as well: he hit .279/.343/.397 in 143 games. His defense continued to draw poor reviews from Twins officials, and he ended up spending part of the year at DH. When Walker got off to a slow start in 2000, hitting just .234 in his first 23 games, he was sent back to Triple-A. He got angry again and requested a trade, eventually ending up with the Colorado Rockies. At the time I felt that Walker's frustration was justified: he was 27 years old, had already proven he had nothing left to learn in the minors, and was just one year removed from an .845 OPS. It seemed to me that he should have been given a lot more slack to work out his issues.

Walker got the bat going again outside of Minnesota, but became a "have-bat-will-travel" player with the Rockies, Reds, Red Sox, Cubs, Padres, and Athletics, consistently hitting in the .290 range with moderate power, but providing mediocre-to-worse defense at second base. His final line was .289/.348/.435 with 107 homers in 1288 games, OPS+ 98, WAR 11.6.

His best season as a hitter was 1998, when he posted a 118 OPS+ and a 14.5 RBA as a hitter, though his overall WAR that year was dragged down to just 1.2 by a lousy -23 Fielding RBA. In other words, although his fielding percentage and other range numbers available at the time showed him to be adequate with the glove, the more sophisticated metrics available now indicate that Tom Kelly was right: Walker's defense really WAS awful that year.

Walker steadied down after getting out of the Twin Cities, turning into a useful role player. His best WAR season was with the Reds in 2002 at 2.8.  He never became the batting champion or star that I expected him to be, but it isn't fair to call him a failure, either. Properly deployed, he had value.