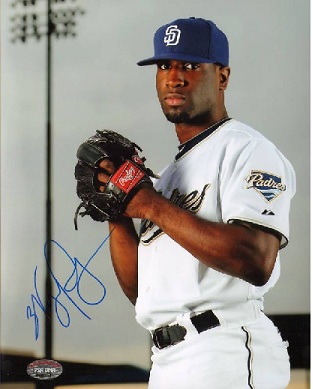 **Padres prospect Wynn Pelzer has been one of my favorites since I Shadow-Drafted him in the seventh round in 2007 out of South Carolina. His usual pattern is to get off to a slow start in April, then push forward with improved performances in May and June. He's following that this year, with early problems at Double-A San Antonio but better numbers lately, including a 10-strikeout, 3-hit, 1-run outing against Corpus Christi on June 16th. On the season, he's now 6-5, 3.98 with a 63/30 K/BB in 61 innings, with a 1.28 GO/AO ratio. The stuff has always been here: 90-95 MPH fastball with some sink, effective-if-erratic breaking ball. The key has been developing better control and refining his changeup, and he's gradually doing that. Video: Wynn Pelzer in 2009 for Lake Elsinore.

**New York Mets pitching prospect Mark Cohoon has performed an amazing feat for Low-A Savannah, throwing three consecutive shutouts. In 27 scoreless innings, he's given up a mere 10 hits and four walks, while fanning 22. On the season, Cohoon is now 7-1,1.30 ERA with a 75/17 K/BB in 90 innings, 68 hits allowed. Who is this guy?
Cohoon was a 12th round draft pick by the Mets in 2008, out of North Central Texas Community College. He was known to scouts as a high school teammate of current Angels prospect Jordan Walden, but Cohoon wasn't as highly regarded due to his mediocre velocity. The 6-2, 195 pound lefty works at 87-90 MPH, but his slider, curveball, and changeup complement the fastball well, and he throws strikes. He's not young for the Sally League at age 22, so we need to see what he can do at higher levels, but right now I'd give him a Grade C+. You can see some video of him pitching last year in the New York-Penn League here.