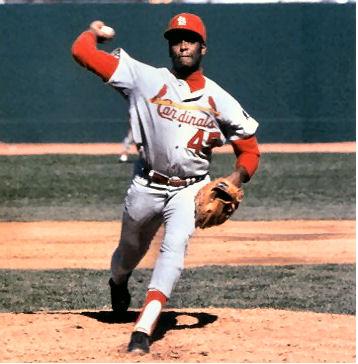 Where are the African American Pitchers?

Thursday afternoon, after writing up the Crystal Ball for Edwin Jackson, I was doing draft research, watching video of high school prospects DeAndre Smelter and Tyrell Jenkins. That got me thinking about African American pitchers. There aren't very many these days, just a tiny handful in the majors.

The situation isn't much better in the minors. Curious, I went through Baseball America's Top Ten prospect lists for each organization. That's 300 top prospects...and of that 300, only THREE are African American pitchers: Jay Jackson of the Cubs, Wynn Pelzer of the Padres, and Trevor Reckling of the Angels.

Jackson and Pelzer were both college pitchers drafted in the ninth round, Jackson out of Furman in 2008, Pelzer out of South Carolina in '07. Both Jackson and Pelzer grew up and played high school ball in South Carolina, then went to home-state college programs. Reckling was an eighth rounder drafted out of high school in Newark, New Jersey, in '07. None of these guys were super-hot prospects when drafted; all three were draft sleepers who have turned into strong prospects.

I looked a little deeper into the prospect lists, and picked out three additional names capable of moving up into Top 300 consideration: Nevin Griffith in the White Sox system, Jeremy Jeffress in the Brewers organization, and Keyvius Sampson with the Padres.

Unlike Jackson, Pelzer, and Reckling, all three of these guys were early-round picks. Griffith was a second rounder out of high school in Tampa, Florida in '07. Sampson was a fourth rounder last year, another Floridian out of Ocala. Jeffress was a first round pick in '06 out of high school in Virginia, but as you know his drug problems and poor control have hampered his career and keep him from top consideration right now. Griffith had Tommy John surgery in 2008 and is still figuring out his craft, while Sampson has barely begun his career but is highly-regarded by scouts. All three could be Top Ten prospects in their organizations next year if things go well in '10.

Some additional African American pitchers in the minors who are prospects include Dexter Carter of the Padres, Roy Merritt of the Mets, and Sam Freeman of the Cardinals (currently out with Tommy John surgery). None of them are likely to end up in a Top 10 list, but all of them could contribute at the major league level at some point.

This was a quick study and without question I'm missing others. But the point remains that there simply aren't very many African American pitching prospects in the minors right now, especially elite ones.

For years, people have pointed out the declining proportion of African Americans in major league baseball, and people have been looking for ways to revive interest in the sport in the black community. There has been some success with this: C.C. Sabathia, for example, participated in the RBI Program when he was a kid.

What else can be done to revive interest in baseball among African Americans? Surely there are more Bob Gibsons, Vida Blues, and C. C. Sabathias out there...what can be done to guide them away from other sports and onto the mound and diamond?