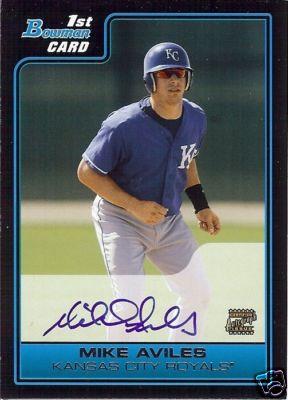 Mike Aviles was one of the biggest surprises of the 2008 season. He hit .325/.354/.480 for the Royals, and played much better-than-anticipated defense at shortstop. Who is this guy, where did he come from, and can he do this again?

The Royals drafted Aviles in the seventh round in 2003, out of Concordia College in New York. He was NCAA Division II Player of the Year, hitting .500 with 22 homers and a 1.016 SLG. But as a senior from a smaller school he had little leverage and the Royals gave him a miniscule $1,000 bonus. He destroyed pitching in the rookie level Arizona League, hitting .363/.400/.585. I gave him a Grade C, pointing out that he was too old for the level, but that he'd done enough to at least be interesting.

Moved up to the Carolina League in 2004, he hit .300/.355/.443 in the difficult environment of Wilmington. I gave him a Grade B-, writing that I thought his hitting would improve further in 2005, but that his limited range at shortstop meant he'd likely end up at second base down the road.

His hitting didn't really improve in '05, but it was OK with a .280/.318/.447 mark with 14 homers for Double-A Wichita. That was just +3 percent OPS compared to the Texas League, and I gave him a Grade C in the 2006 book, projecting him as a utility infielder. I saw him play for Wichita a lot and was impressed with his work ethic and hustle.

Aviles started off 2008 on a tear, hitting .336/.370/.631 at Omaha through 51 games. As you know, he continued to bash the ball after being promoted to Kansas City. From watching him play this year, his bat looks a bit quicker now. He always showed a low strikeout rate, although he's never been a big walk guy. I will admit, I never saw Aviles as a guy who would hit like this at the major league level, and it is out of context for his career.

Defensively, scouts still rate his range as being only mediocre at shortstop, but interestingly all the defensive metrics rate his glovework as above average in the majors this year. Is that a statistical illusion? Or is he really better than the scouts think? I"m not sure.

With the bat, I think what we have here is a classic age 27 performance spike.  His MLEs over the last few years show him as more of a .260/.310/.390 type hitter, not great but reasonable for a guy with some defensive versatility. He hit .359 on balls in play this year, and I don't think that's sustainable in the long term. Moving that back closer to league average would give him numbers more in line with the MLEs.

If I had to bet on his numbers for 2009, I'd project a pullback to performance more in the .265/.310/.400 range. That said, I think he should get to play in '09 just to see what happens, either at shortstop or at second base. He is a lot of fun to watch, and his work ethic and hustle are impressive. He is a self-made player, succeeding through work and instinct rather than pure tools. I don't see how the Royals have anything to lose by letting him play. He had the highest VORP on the team this year, and the best ratio of Win Shares per at-bat.