Share All sharing options for: Impressions from Omaha, Part One: Fresno Grizzlies

I made a quick trip up to Omaha this weekend to see the Stormchasers take on the Fresno Grizzlies, Triple-A farm team for the Houston Astros. This trip was primarily for relaxation and mind-clearing after a long summer so I did not bear down on the Grizzlies with detailed scouting in mind. But I did take a few notes and make a few observations on key players of interest.

The Stormchasers will follow in a separate article. I apologize for the poor quality of the photos. My digital camera is on the blink and my phone camera isn't very good. 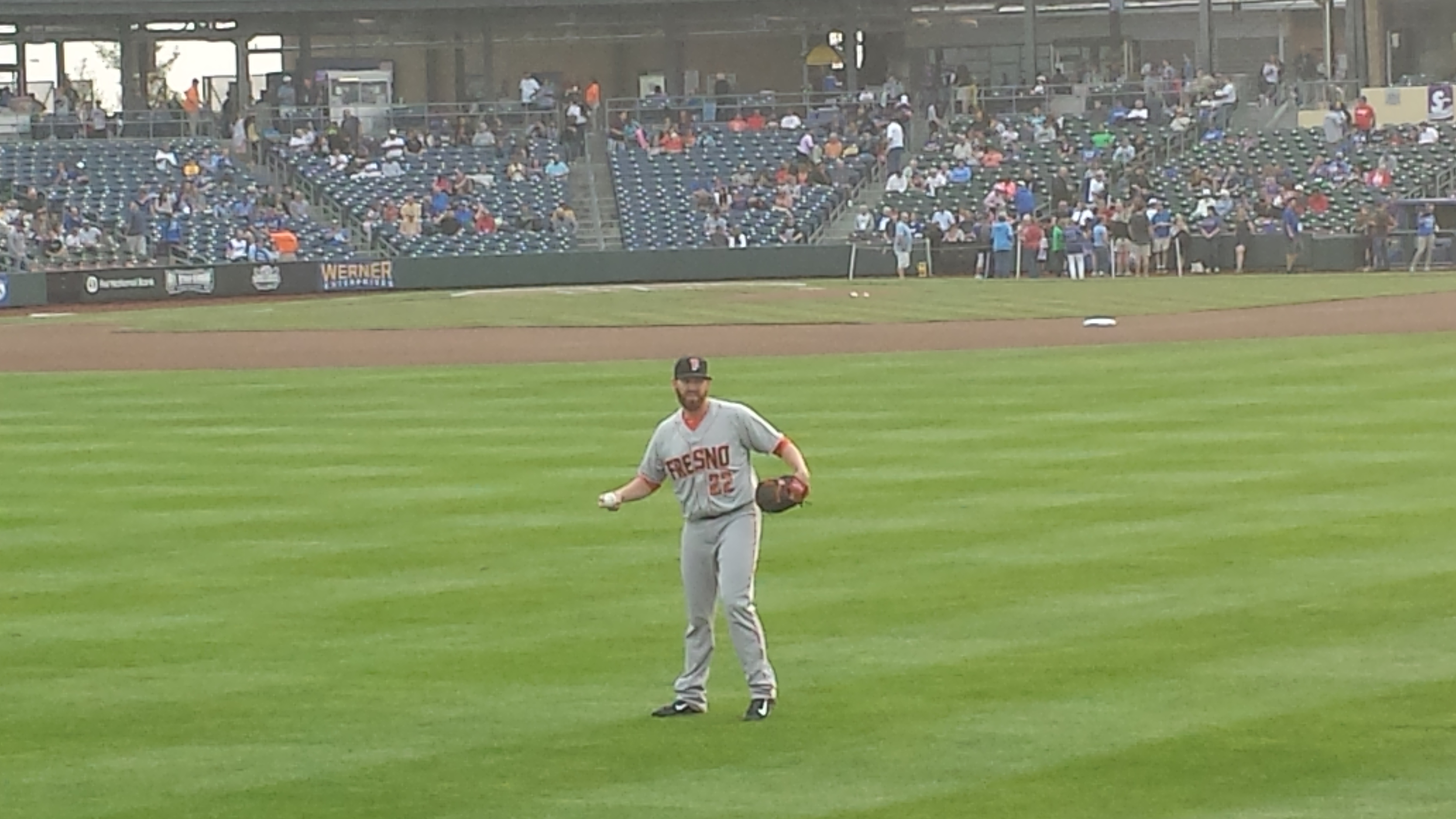 That's Dan Straily beginning his pre-game routine with some long toss in the outfield Saturday night. He did NOT have a good game: 3.1 innings, 11 hits, nine runs allowed, three walks. He did manage to fan five but overall this was the worst I've ever seen Straily. His only effective pitch was his change-up. He had a lot of problems with his slider; at times it was a flat slurve, other times it had more bite but he couldn't locate it and the hitters were seldom fooled either way.

His fastball maxed out at 90 on the scoreboard gun and was usually right at 89. The scoreboard gun might have been reading one MPH slow; sometimes it matched the scout guns exactly, other times it was one MPH slower. Either way, Straily had neither good command nor good stuff Saturday night and Omaha hit him hard.

That's Asher Wojciechowski with his first inning warmups Sunday afternoon. He had better luck than Straily, going 5.2 innings allowing six hits, four walks, with three strikeouts. He had to work out of trouble a few times but did so successfully, giving up just one run. His command wasn't great but he showed better stuff than Straily. Scoreboard had him maxing at 91; I saw a 92 on a scout gun and he maxed 93 during his major league outings earlier this year so I do think the Omaha gun is a tad slow. The heater had more action than Straily's and the slider had more bite, though he had trouble commanding it. Omaha didn't take advantage of it however.

Quick hitter impressions: Jon Singleton looked like Jon Singleton. He was pretty selective and didn't lunge outside the strike zone, though he swung and missed on change-ups. Raw power still looks huge and he smoked a line drive to shortstop that was hit nearly as hard as the home run he launched.

The Astros Matt Duffy (not to be confused with the Giants Matt Duffy) is hitting .298/.373/.483 with 18 homers, 48 walks, 84 strikeouts, 101 RB in 466 at-bats. Like the Giants version, Astros Duffy might not stand out in terms of pure athleticism or tools but he looks like a fine player. He showed above-average bat speed, with not as much raw power as Singleton or Preston Tucker but with enough zip in the bat to handle big league velocity I think. He handled all the routine duties at third base without issue; range looked adequate, arm was not especially strong but was accurate and with a quick release. He's 26 but I think he can be a good role player.

Everyone wants to know about Tyler White, 33rd round draft pick from 2013 currently hitting .377/.487/.568 in 49 games since being promoted to Frisco. Is he for real or not? Unfortunately he didn't play Saturday so I only got to see him in four plate appearances Sunday afternoon. He showed a good batting eye, a compact swing, and smacked a hard shot between the third baseman and shortstop for a base hit. From that swing it looked like he had pull power against fastballs although I also felt his swing looked rather level, without the same sort of home run loft you see from Singleton or Tucker when they are going well.

Defensively I couldn't tell much other than he can handle routine plays at first base. He has the running speed you would expect from a guy listed at 5-11, 225. Overall he reminded me of Ron Coomer, if you remember him, and I can see White becoming a similar role player in the right circumstances.