Despite the recent trouble his overall slash line of .296/.360/.466, wRC+135 is quite respectable. Indeed, his wRC+ ranks second among major league third baseman this year, although his defense has been troublesome enough to lower his fWAR value, which at 1.9 is just 13th among hot corner regulars.

Chisenhall was drafted by the Indians in the first round in 2008, 29th overall, from Pitt Community College in North Carolina. As a freshman with the University of South Carolina in 2007, he was charged with burglary and was kicked out of the program, landing at the junior college level, where he dominated. He served six months probation in 2008, and the Indians were comfortable enough with his makeup to invest a first round pick.

For much of his career, there was a dichotomy between the stats and the scouting reports. Chisenhall always excited scouts with his bat speed and his swing. Most anticipated that he would hit for both power and average. His plate discipline wasn't spectacular, but it wasn't bad in the minors, and his swing drew plaudits for mechanical soundness. On defense, he featured a solid third base arm and enough range for the position, not a gold glove type but not a liability either. 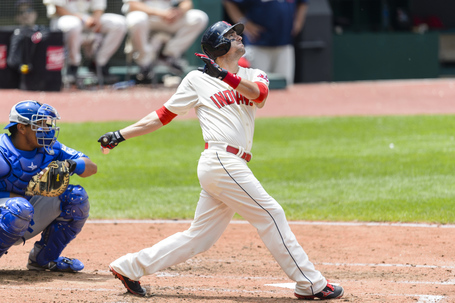 The overall career line is exactly what should be sabermetrically expected based on his minor league performance.

Looked at from the broader career perspective, his improved numbers this year are a correction to his poor numbers last year, everything balancing out in an overall career line that is not out of context with his minor league numbers, even if is not as good as what scouts expected.

There's still two months to go in the season and we'll have to see if he pulls out of the current slump. If I had to make a projection, I would guestimate that he will pull out of it eventually and finish with something like a .285/.350/.450 slash this year. He'll bounce around in that neighborhood through his late 20s, gradually fade in his 30s, and finish with a career mark in .270/.325/.440 territory.