Roster moves and injury updates from a slow day in baseball.

Hey folks, welcome to the Gameday thread. The MLB season kicks off in earnest tomorrow at 1 pm EST when the Cubs visit the Pirates in Pittsburgh, Jeff Samardzija and Francisco Liriano square off in that one. The Minor League season is set to begin on Wednesday, April 2, with AA, A+, and A level games beginning. Tuesday will feature a few more last minute tune-ups with Lehigh Valley (PHI - AAA) heading to Reading (PHI - AA), Sacramento (OAK - AAA) heading down to Stockton (OAK - A+), and Frisco (TEX - AA) facing off against Round Rock (TEX - AAA). Reno (AZ - AAA) will face off against the University of Nevada and Delmarva (BAL - A) will play against Salisbury University.

Look for a format change to include notable probable starters as well as tracking the Top 100 prospects in the game. As always, we will continue to cover any injuries that arise or major roster moves as the season progresses. I am excited as all hell that we are coming down the home stretch for the offseason, and Opening Day for us prospect junkies is almost here.

There were only two games last night, one last tune up for the Astros against the Veracruz Rojos of the Mexican League, and the Dodgers squaring off against the Padres. 6'1, 190 LB right handed hitter Tommy Medica was the only rookie to make an appearance, going 1-3 with a walk and a strike out. Medica handled left field and did not make an error, which is always good when playing a new position. He is listed as a first baseman and worked on playing the corner outfield this spring, adding some defensive versatility to his game. While not a gold glover in the outfield, he has shown to have half-decent range with a fringy arm and hasn't made any egregious mistakes out there. He is looking to prove his bat will carry his defensive short comings.

The Astros sent out what amounts to be one of the minor league squads facing off in recent exhibitions against their parent club. They took home the win as the team's top three prospects and two most recent signings from the Mexican League played the whole game. Carlos Correa, the short stop of the future and 7th overall prospect in baseball according to Baseball America, went 0-2 with a walk, and a sac fly resulting in an RBI. Outfielder George Springer manned right field in this game, going 0-3 with a walk, run scored, RBI, and a strike out. The 18th ranked prospect in the game yielded to veteran Adron Chambers to play his usual home of center field.

Top pitching prospect for the Astros, first overall pick of the 2013 draft, and 39th ranked prospect overall Mark Appel got the start in Minute Maid Park. He was used for three innings, not allowing a run or walk with just two hits allowed and three batter sent back to the bench with a strike out. The Houston-native breezed through the Veracruz line up, not getting into any stressful situations while throwing 28 of his 36 pitches for strikes.

Former Mexican League star Japhet Amador anchored first base for the Astros, driving in two with a single, walk, and a strike out. He manned the five hole in the line-up, offering protection for George Springer. Left fielder Leo Heras was the other signing out of Mexico, and the diminutive outfielder walked twice in the lead off spot (once intentionally), and also knocked a single and scored once in five plate appearances.

Now for the roster moves and injuries, including a few new additions including Tim Beckham, Brett Marshall, Asher Wojciechowski and Michael Almanzar.

Japhet Amador knocked in a third of the runs scored by the Astros, and on a slow day like this, that's enough to win this honor. 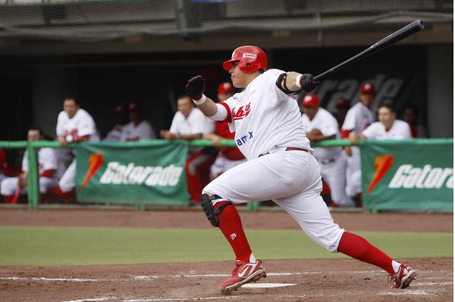