By now, Spring fever is fully in session as the college baseball division races begin to heat up as well

This weekend in college baseball brought us some ACC dominance worth mentioning, several top 30 teams playing out of conference cupcakes not worth mentioning (Ex: #13 Oklahoma versus New Orleans), and Kris Bryant continuing to mash home runs on a daily basis.

- Rebound of the Week: #15 South Carolina - After ending up on the wrong side of a sweep to Florida last week, the Gamecocks (31-10, 11-7 SEC) returned home to Columbia finding themselves on the right side of a sweep this weekend of #18 Kentucky. LB Dantzler, a Senior first baseman, leads the Gamecocks with 12 home runs.

- Sweeper of the Week: #8 Virginia - In a hard-nosed battle of the ACC's top dogs behind North Carolina, the Cavaliers (35-6, 16-5 ACC) showed no mercy to #5 Florida State by sweeping a Saturday doubleheader, than sweeping the series with another win on Sunday. Surprisingly, only 2.5 games back of UNC.

- Under the Radar Performers: UNC Wilmington - Look for the first place Seahawks (30-11, 12-2 CAA) to make a splash into this week's rankings. They're 9-1 in their last ten games, including a weekend sweep of George Mason.

- Disappointing Team of the Week: #6 Oregon State - You get this award when you get swept in a Saturday doubleheader by previously 9-25 Washington, best known for producing Tim Lincecum, and that's about it. The Beavers (30-8, 11-4 Pac 12) bounced back to win Sunday's contest 8-0.

- Pitcher of the Week: Luke Farrell - RHP - Northwestern - The Senior had already overcome odds to even make this start. The son of Red Sox manager, John Farrell, Luke was absolutely brilliant (9 IP, 3 H, 0 R, 0 BB, 10 K) in a game played on the big stage at Wrigley Field (where he may pitch again one day) versus a hot hitting Michigan lineup. He's 6'6", throws in the low 90's, and will likely be a single digit pick in this year's draft, if for no other reason than he should make a great senior value sign (probably with the Red Sox). 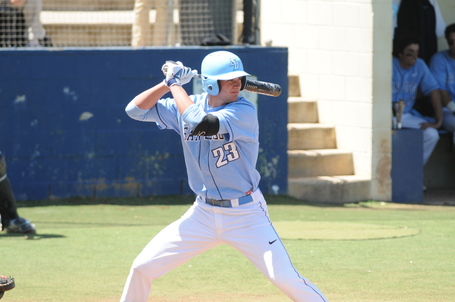 - Hitter of the Week: Kris Bryant - 3B - San Diego - Bryant went 5-10 this weekend and has hit 5 home runs in his last 4 games. He now leads the nation with 20 home runs and 48 walks. Current slash line: .353/.529/.897. What's left to say about Bryant that hasn't been said before? The kid drops bombs on a weekly basis like it's his job, and after June 6th when he's selected among the top ten picks in the draft, it will be his job.

- Two Way Draft Prospect of the Week: Marco Gonzales - LHP - Gonzaga - Not only did he outpitch Scott Frazier of Pepperdine on the mound in Friday's contest, Gonzales, a potential first rounder as a pitcher, also leads the 1st place Bulldogs (26-11, 13-5 WCC) with a .345 AVG as the team's first baseman.

- Ready for Prime Time Award: Bobby Wahl - RHP - Ole Miss - Opposing hitters on Missouri, hit a wahl, so to speak, going up against Bobby Wahl this weekend. Great to see Wahl, who's struggled mightily with command and consistency as of late, turn in a superb outing (9 IP, 3 H, 0 R, 2 BB, 8 K) like this.

- Mid Major Ace of the Week - Stephen Janas - RHP - Kennesaw State - The talented junior was named Atlantic Sun pitcher of the week following his shutout of North Florida. He now carries a miniscule 0.70 ERA on the season.

- Deserves More Attention Player of the Week: Julian Ridings - OF - Western Carolina - The talented Junior leads the Southern conference with a .417 AVG on the season. He's also hit 7 home runs and stolen 8 bases. Last summer he was named the top prospect in the Valley League by Perfect Game.

That wraps up this weekend's recap. Have a great week, everyone. Stay classy, not crassy